Little House on the Prairie 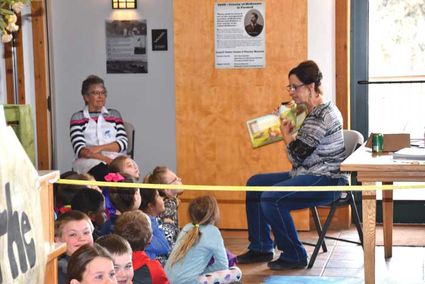 Sandy Richter, from the Pioneer Museum of McKenzie County, reads a short story taken from The Little House on the Prairie book to the second graders from the Watford City Elementary School on Wednesday, April 25. The second-graders also had the opportunity to learn how to make bread and how to churn butter and were able to sample a piece of bread and butter afterwards. They also learned about washing clothes from scrubbing articles of clothing on the washboard to how it is done today. The history of McKenzie County was another topic, it was the last county in North Dakota to be settled and it was originally called the Island Empire being surrounded by three rivers and the badlands and the only way there was the Fairview lift bridge or by ferry. Sandy has a goal to make museums an interesting place where kids want to come and learn about the past.