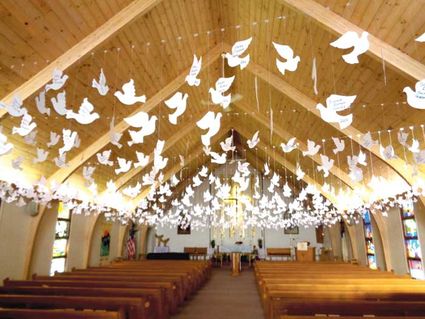 Zion Lutheran Church in Fairview is celebrating its 100th anniversary this year. While Zion is 100 years old, 1943 marks the year that three other area churches joined the congregation; St. Peters Lutheran, 4 Mile Scandinavian and Bethel. The doves in the sanctuary represent all those who were baptized at Zion after the merger. They were put up on March 31 and will stay indefinitely. Doves are arranged in decades with the oldest ones nearest the altar. The ladies who worked on this huge project said they had lots of fun reminiscing and church goers are enjoying finding names of those they know.

The official centennial will be held this summer with a special service and dinner on Sunday, July 15 followed by an ice cream social and walk through on July 21 during Old Timers Festival. Displays of all four churches will be featured. Some kind of event will also take place at each of the other three sites during the summer.