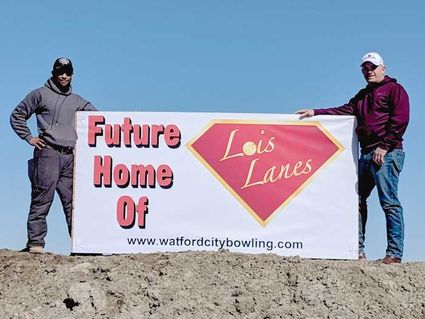 Three years ago, Sheriff Gary Schwartzenberger had an idea. He noticed McKenzie County's youth needed a better way to spend their free time. He had fond memories of bowling as a kid. He talked with others in the community and found many missed having a bowling alley as well. Earlier this year he teamed up with Layne Bennett, a former Marine recruit of his and the concept of Lois Lanes was born. They teamed up with Kirby Engineering of Williston, Volo Digital of Phoenix Arizona, a few local investors, and they were on their way. The business was named for Gary's mother, Lois, who had always referred to herself as "Superman's girlfriend." Lois Lanes will be opening in the fall of 2018. The friends hope to open their doors on November 10 to coincide with the United States Marine Corp's birthday but they are not certain if it will be ready then. Layne and Gary are excited and looking forward to serving this wonderful community.

When it does open, Lois Lanes will be a 30K square foot family friendly facility on 3.6 acres. They will have the bowling alley, a trampoline park, arcade, snack bar and party rooms but they will not stop there. They plan to expand in the future to include a skadium, go-cart track and indoor shooting range. It will be located a block north of the lumberyard on the corner of 16th St. NE and 6th Ave. NE in Watford City, ND. This is Gary and Layne's first joint business venture and they expect it to go well. According to Layne, the population of Western North Dakota is expected to rise again in the next two years. He said "We should be able to expand in the future as far as our projections go." Currently, Layne Bennett lives in Minot, ND. He has a son and daughter. Gary Schwarczenberger is a retired Marine and the current sheriff of McKenzie County. He lives in Watford City with his wife, Nicole, and their four children.

You can learn more at wwwloislanes.com or on their Facebook page, http://www.facebook.com/ loislanesfamilyfuncenter or call 701-353-1775 for more information.