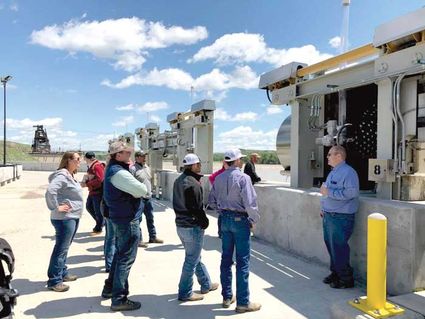 James Brower, Manager of the Lower Yellowstone Irrigation Project, explains to the ag tour group the technology behind the diversion dam. (Photo by Jordan Hall)

The Montana Farm Bureau hosted the Young Farmers and Ranchers Ag Tour on June 1-2 in the Richland County area. Taking a tour of local points of agricultural significance, a group from around the region learned more about local food and natural resource production and consumption.

The Roundup spoke to the Montana Farm Bureau Director of Membership Relations, Sue Ann Streufert, who also serves as the Young Farmer and Rancher Coordinator, about the importance of the event.

Using a yellow school bus from the Sidney School District, the group of about fifteen attendees toured the Lower Yellowstone Intake Diversion Dam, Eastern Ag Research Station, Sidney Sugars beet factory, Meadowlark Brewery and Safflower Technologies. The group also received a tour of the Steinbeisser farm and ranch, hosted by Don Steinbeisser, Jr., and made other stops along the tour route to learn about agricultural production.

Visiting the places where local agriculture is produced or consumed wasn't the only purpose of the tour, however.

Streufert told The Roundup, "Networking is a big piece of this. We want to create networking opportunities for young people in agriculture."

She continued, "Honestly, it's important to just talk about those challenges. It's an opportunity to get together with other people in agriculture, so it's a two sided purpose, both education and networking. Producers, especially young producers, need to have and build relationships that can help them in the future."

Starting at 3 p.m. on Friday and going to about 3 p.m. on Saturday, the tour organizers were sensitive to the busy schedules of the young people attending. Streufert said, "It was pretty short and sweet, but we packed a lot into the agenda."

The majority of the fifteen or so attendees were local to Richland County, but others were present from Miles City, Circle, and as far as Shawmut, Montana. The North Dakota Farm Bureau Young Farmer and Rancher chair, Brandon Lindstrom, also attended the event in order to learn more about neighboring production.

Along with Sue Ann Streufert, the tour was organized by Gil Gasper from Circle, Ben Johnson of Sidney, and a committee of volunteers who did most of the organizing regarding tour stops.