New Lease on the Biking Life 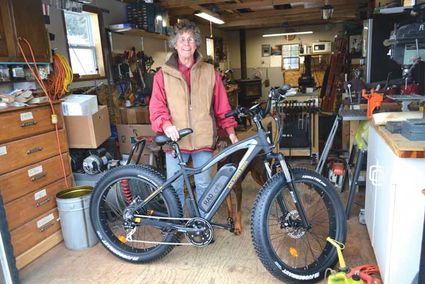 I have loved biking ever since I first mastered the balancing act required to propel a two wheeled conveyance down the road. Through the years I've had an assortment of bicycles ranging from a single speed clunker to a magnificent twenty-six speed mountain bike. When I moved to eastern Montana two decades ago, I would haul out my trusty bike and pedal down trails and paths and roads. I enjoyed the exercise as well as the opportunity to spend pleasurable time outdoors on the prairie.

Four years ago, I moved to Virginia City, smack dab in the middle of mountain country. I brought my 26-speed mountain bike with me, ready to conquer hills and enjoy biking mountain trails.

Hah, think again. I rode my bike once that first summer, or tried to, as flat stretches of more than fifty feet don't exist in this part of the country. I found myself using two speeds on that mountain bike, either braking frantically to keep from spinning out of control coming down steep inclines or pedaling furiously in low gear trying to make it up a hill. Since I have no desire to train for the Tour de France, the type of biking I experienced in Virginia City provided no fun whatsoever. So, I parked the bike and used shank's mare for my exercise.

Now mind, I love walking, I walk everywhere, but I missed the freedom and the sense of exhilaration a good bicycle ride can provide. I wanted to bike again, but not in this area and not with a regular pedal bike even if it had forty-five speeds. Forty-four of them would be basically useless anyway.

A year or so ago, a friend bought herself an electric Rad Rover bicycle with 4-inch fat tires, perfect for gripping and maneuvering on the sort of terrain found in Virginia City with our gravel roads and two track mountain trails. The bike featured seven regular manual shift gears for pedaling, with an additional five levels of battery-provided electric assist. My friend loved her bike and enthusiastically described what she could and could not do with it.

I set my heart on a Rad Power bike, or ebike as I think they are called. I decided I needed such a contraption if I ever wanted to enjoy biking in Virginia City. In my opinion, an electric bike makes perfect sense for an older rider. We can bike, we can enjoy ourselves, and these steep hills will no longer present such overwhelming challenges to climb.

However, these bikes do not come cheap. I procrastinated in ordering one, figuring the money would be better spent elsewhere and why should I splurge on a contraption I would only use six or seven months out of the year, if that.

Last year we moved out of Virginia City proper and onto our mountain retreat that overlooks Virginia City. I applied for and received a fire-suppression grant to clear brush and other debris from the perimeter of our yard. This brush clearing will hopefully save our structures should a fire ever tear through the mountains. At the end of last fall, I completed the task and received the grant money. The sum exactly matched the price of a Rad Rover electric fat tire bike.

I took this as a sign in my favor. I took the plunge and purchased the bicycle of my dreams in late March. The bike arrived during a snowstorm. Consequently, my new acquisition sat in the shop awaiting better weather. After the snow melted, muddy impassable paths made an appearance. So, I had to content myself looking at my new toy for several weeks before the roads and the weather finally cleared. The big day arrived for my first excursion.

What a kick! I love this bike. The Rad Rover with its fat tires is a heavy machine, but it rides well and the assist has proved to be everything I anticipated it would be. I can pedal non-stop up Cornucopia and up Lois Lane to my cabin, and I can travel on any road my little heart desires. Level one and level two of electric assist help propel me most places I want to go, but I still prefer using level 3 when pedaling back up the hill to home, although as my personal goal I hope to rely only on level 2 assist by the end of the summer as I travel back up the hill to home.

The first time I rode through Virginia City, I headed up Jackson Street (when I say 'up' Jackson Street, that is exactly what I mean) and pedaled to the top of that hilly road nonstop, which would have been an impossibility for me to accomplish if I rode a mere pedal bike. I reached the top of the street with a huge grin on my face, thinking to myself that if anyone had noticed this little old gray-haired lady pedaling up that incline with no apparent difficulties, they would think to themselves, 'WOW, look at granny go!' Little would they realize I had assistance from my trusty two-wheeler.

The hardest part of riding my wonderful contraption has proved to be getting down Cornucopia from my cabin. The bike wants to accelerate faster and faster as we hurdle downwards. Good thing for brakes, excellent choice to have those fat tires that grip the gravel so well, and what a heady feeling of freedom as the wind blows my hair while I cannonball down the road. The bike provides so much fun whether I am zooming down a hill or pedaling upwards.

I can bike again and thoroughly enjoy this marvelous outdoor activity. Anyone who loves to bike but faces hilly terrain too difficult to allow for much fun would appreciate an electric assist bike, which comes in a variety of models suitable for different terrain and for different applications and uses. Other people may want their motorized side by sides, but not me. I think my new toy may prove to be one of my better investments.