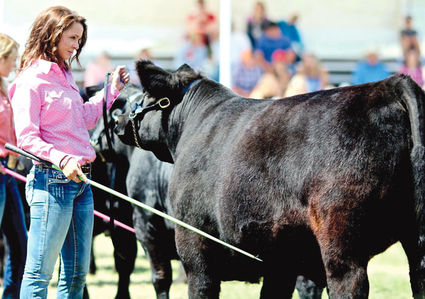 The twelve-year 4-H veteran had years of experience showing pigs in the ring, but had never delved into the steer business. "I always showed pigs because they were easier to keep. We didn't have a whole lot of land to keep a steer," she explained. When the opportunity arose to keep a steer, Lien jumped at the chance. "I started babysitting for Jason and Stacy McNally. They had steers, and they told me I could keep mine there too," Lien said.

Lien travelled to South Dakota to pick up her steer, and kept it at the McNally's, outside of Sidney. Before the fair, Lien was "out there every day washing him, blow drying and tying him up and working with him to get him ready," she said. "You have to make sure they're comfortable around other steers and other humans, and they get used to noise." The McNally's three children helped accustom the steer to lots of noise. "Once the steer got used to other steers, we would all go out there and see how they'd react, making sure they wouldn't freak out".

In the few weeks before fair, the real showmanship work began. "We really started putting him in the show halter and using show sticks. I led him in the ovals and made sure he would set up. I went over every scenario that may happen to make sure he'd get set up right and stay calm," she explained. Rowdy or improperly trained animals can be a danger to those in the ring, as well as spectators and other animals.

Despite her limited experience, her hard work and time spent with the steer paid off. Lien earned grand champion in the Market Beef Division, as well as Grand Champion Senior Steer in Showmanship. Lien's steer was purchased by Chad Herman of 5H Trucking in Lambert. 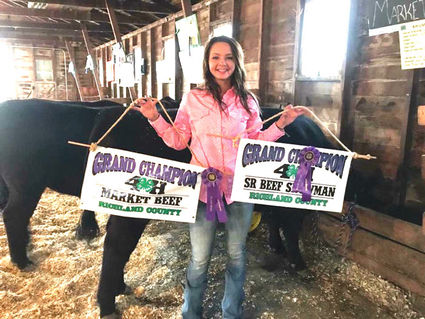 So is it nature or nurture that makes a great steer? According to Lien, "It's about half and half." Though Lien's steer was bred to show, the hours she put into the training were the edge it needed to become a winning animal. "He was a great steer, but a lot of it is training. It's all about time and effort. You can take a wild steer if you work with it, you can get it show ready.  A lot of it is that training," she concludes.

Lien is hoping for a repeat this year at the Richland County Fair & Rodeo, where she will again show a steer in both the Market Animal Division and Showmanship, as well as a hog.

Of her years of 4-H experience, Lien says, "I think it's a great experience. It definitely gives you a lot of skills. I think it's great for kids who are really passionate and get to stand out and have fun."

Lien is an upcoming senior at Savage High School, and is the daughter of Brandi and Ross Lien.