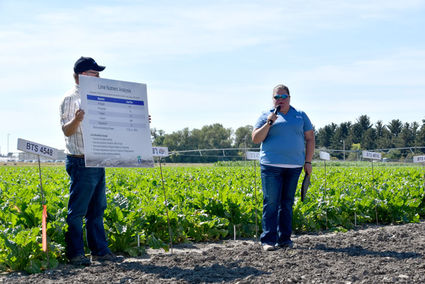 Dryland growers in the MonDak area can take advantage of a program through Sidney Sugars to test the benefits of spent lime on their fields. The lime and loading at the factory yard are free.

In the vast dryland fields of eastern Montana and western North Dakota, high acidic soils are becoming more common, preventing healthy crops. About five years ago, soils in the Froid area tested between 5.0 and 5.8 pH, which indicates high acid. In response, the USDA-ARS applied spent lime at a rate of three tons per acre. ARS Research Agronomist Bart Stevens said the lime was applied as a corrective measure, not a research project, so he has no research data showing how much the pH changed because of the lime, but he is sold on the benefits. Before Stevens moved to Montana, he spent a couple of years in Nebraska where he was involved in a study evaluating different materials including spent lime from a sugar beet factory in western Nebraska, applied to sandy soils in west central Nebraska. He said that beet lime applied at about 6 tons per acre increased soil pH from 4.6 to 5.6. In this Nebraska study, beet lime was slightly more effective than conventional agricultural lime at increasing soil pH.

In low pH soil, some nutrients are not as available to the plants as in soil with a more neutral pH. Aluminum and the plant nutrient iron become more soluble at low pH and can become toxic to plants if the pH gets too low. Simply by raising the soil pH, nutrients such as phosphorus and molybdenum become more available for plant uptake, while iron and aluminum become less abundant. Spent lime is also a great source of the plant nutrients calcium and magnesium, which balance out the soil nutrient composition.

Universities such as North Dakota State University and the University of Minnesota Crookston have seen positive results for the ten years they have been conducting research on spent lime.

Based on those results, as well as those from her own local plots, Sidney Sugars agriculturalist Vanessa Pooch would like to expand spent lime into more irrigated and dryland test plots.

Pooch follows the recommendation from the universities in spreading eight to ten tons of spent lime per acre, which is really just a dusting. The lime is incorporated into fields where possible, but may be top dressed as well, where it would likely take a little longer to see the effects.

In addition, studies on North Dakota dryland, as well as Pooch's irrigated plots have shown the physical condition or tilth of the soil improves in both.

The initial reason for lime testing by Sidney Sugars in 2013 was to help stem the disease aphanomyces in sugar beet fields. With the wetter spring this year, and more disease, interest in lime has increased in area growers. Improved drainage is also a benefit in areas where water may accumulate in fields. Improved microbial activity and symbiotic nitrogen fixation by legumes are also benefits of spent lime application.

Pooch said the most important thing growers can do is have their soil tested first. Then spread the lime on only ½ the field so the benefits can be monitored.

Lime and loading is free to local growers but they must provide their own trucking and applicating.