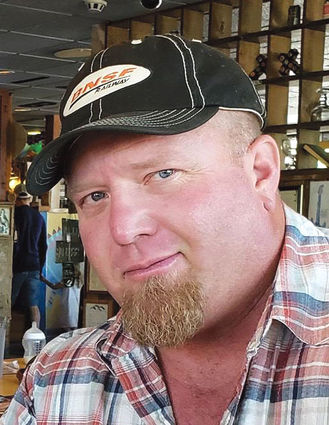 Memorial service for Timothy "TJ" Haugen is at 10 a.m., Saturday, August 4, at Faith Alliance Church in Sidney, MT with Pastor Paul Turek officiating. In lieu of gifts and flowers a donation account is set up for Hunter and Erica through Stockman Bank of Sidney. Fulkerson-Stevenson Funeral Home of Sidney is helping the family with arrangements. Remembrances, pictures and condolences may be shared with the family at http://www.fulkersons.com.

Timothy John "TJ" Haugen, 47, of Pasco, WA, passed away suddenly on June 25, 2018 due to complications from injuries sustained while working the job he loved at Burlington Northern.

TJ was born on August 24, 1970 in Sidney, MT to parents John and Lynn (McCloskey) Haugen. He was the first born, the son, and the big brother. He attended West Side Elementary, Sidney Middle School and graduated from Sidney High School in 1989. During his high school career he was an all-around popular guy who always seemed to have a good time and had many friends. He was a member of the Sidney Eagles football team-helping them win many state championships. He was also part of the high school basketball team and played first base for the Richland County Patriots. Throughout these years, if he wasn't on one of the fields or on the court, you could find him at Haugen Auto with his dad, uncle and grandpa, hunting in the hills or fishing on the canal bank-always on the hunt for "the big one." His love of cars and hunting was bred right into him. He spent countless hours at the shop and loved being around all the "good ol' boys" talking about cars or sharing hunting stories. He was proud of his Norwegian heritage.  During high school he worked at Sidney Oil Co and after graduation he also worked a campaign at Holly Sugar.

In the fall of 1990, TJ enlisted and left for the Navy. He graduated with honors and at the top of his class from basic training and soon became part of the Underwater Demolition Team. This ultimately led him to a home base at Ford Island (aka "Seal Island") in Honolulu, Hawaii where he was part of Seal Team 1. During his six years in Hawaii he met his future wife, Marianne, and they developed a passion for bodybuilding. Together they competed in a few Hawaiian Classic body building shows earning top recognition. He also loved to box and boxed in the Hawaiian State Games for a couple of years. Someone once asked him why he had blue boxing gloves and he said, "It's because blue is the color of first place." He was honorably discharged from the Navy in 1996 and moved to Burbank, WA where he started working as a car-man for Burlington Northern.

In 1999, TJ and Marianne married and they made the Burbank/Pasco area of Washington State their home. TJ continued to work for BNSF where an incredible brotherhood of men surrounded him. At some point in his time at BNSF he acquired the nickname of "Huggy Bear" and will be remembered as a man of great integrity, work ethic, BBQ master and so much more. This brotherhood is a tight knit group with a special bond that made their long days/nights and long hours seem short.

TJ's two proudest accomplishments are his son Hunter (15) and his daughter Erica (10). Everything he did, he did for them. He showed them what love was and wrote notes everyday saying that he loved them. He loved teaching Hunter about cars and hunting and on evenings and weekends you could find all three of them on the water fishing. He was a devoted father who loved being with his kids.