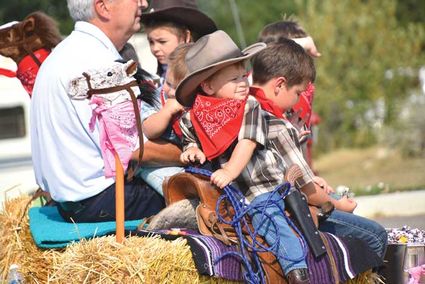 The Old Settlers Day tradition began in the 1940s, when a group of ranchers decided that the small Alexander community needed a celebration after harvest. The event centers on a parade and beef barbeque, cooked under coals in a pit.

The families of both Jim and Barb (Powell) Jacobson have lived in the Alexander area for several generations. Jim's grandparents homesteaded in 1905, just a few miles away from where Jim grew up and where the couple currently resides. Barb's great grandfather homesteaded around the Williston area, and her grandparents farmed southwest of Alexander. Both Jim and Barb graduated from Alexander High School in the mid-1960s, and were married in September of 1967. Jim joined the US Navy after high school, and was assigned to the Admiral Staff of the Commander in Chief of the Pacific Fleet. The couple spent a few years stationed in Hawaii and California, and returned home to farm and raise their four children. Jim sold crop insurance until just four years ago. Now, Jim says, "We're retired, but we run some cows, farm a little bit, and stay active."

Jim is proud to say that he is a third generation supporter of the beef barbeque at the Old Settlers Day event. Both his father and grandfather have donated the beef for the event in years past, upwards of 1200 pounds of beef roast. Each year Jim takes part in preparing the beef using the same methods from the 1940s. "It's quite a process. Friday at noon is when we package it all to go in the pit. We burn the wood on Thursday night. At 5 pm the coals are dug out, and the sacks of beef are laid in. The coals are put back on top and it's covered. The beef is served on Saturday at noon." Jim explained.

The couple has planned a family reunion for the Jacobson side of the family for the weekend in addition to the Old Settler's Day festivities. Jim and Barb are excited to take part in the event. "Old Settlers is kind of a family thing. It's just one of those things that honors the families that have been in the Alex community for however long. It's the 73rd year, so it's pretty important for our community," he said.

The Old Settler's Day Celebration begins on Thursday, August 30th with a volleyball game, flag football and a bonfire, followed by a community-wide chili cook-off from 1 to 7 pm on Friday. The Hiway Lounge cornhole tournament begins on Friday at 5 pm, and again on Saturday following the football game. Parade registration begins Saturday, September 1st from 8 am to 11 am, with the parade stepping off at 11 am. The beef barbeque is served at noon in the park, and the family program honoring Jim and Barb Jacobson starts at 1 pm. A kid's carnival is available until 4 pm. The Alexander Comets versus the Mandaree Warriors football game kicks off at 2 pm. Music by The Relics, a Sidney based rock and roll band, and a street dance on Main Street wraps up the 73rd Alexander Old Settler's Day Celebration.

Jim asks that community members help sponsor this family event by purchasing a $2 button. Buttons are available at businesses in the Williston and Watford City area, as well as throughout Alexander and in the park on Saturday.