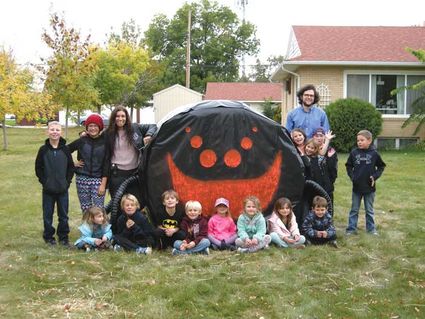 Beautiful, creepy and interesting hay bale sculptures are all over Sidney, Savage, and Lambert in Montana, once again. They are the creations of groups from 4-H and from the general public as well and are awaiting the critical eyes of residents and visitors alike to judge and vote for them. The regular judging was Friday, September 28 but the hale bales do not need to be cleaned up until October 10. There will be a Grand Champion award, 1st, 2nd, 3rd, and a Reserve award. The winners will be decided by a committee. There will also be a People's Choice award that the community can come into Reynolds Market in Sidney, Montana to vote for after viewing the bales. Voting for People's Choice will continue until October 8. Maps of the bales and their locations are available at Reynolds Market, High Plains Veterinary Clinic and the Sidney Area Chamber of Commerce and Agricultue in Sidney, Montana. All the hay bales will be out to view until October 10. I asked organizer, Marci Lynn Sondeno, why they decided to open the Hay Bale Art competition to the public this year and she told me that it was because it had turned out so well last year and the community had enjoyed it so much. I asked her if the response this year was looking as good as it was last year and she replied, "Oh yeah! We doubled in hay bales from last year."

The Boys & Girls Club of Richland County is one of the new contestants this year The program director of the Boys & Girls Club, Janelle Buxbaum, explained how getting the kids involved with community activities is very common for the kids at the club. "We love to have our kids involved in as many community activities as we can. We take pride in our community and the members love to show their families and friends their work around town when they have the opportunity to." The bale was acquired from Norby Inc. The kids got to decorate it the 26th and 27th with plastic, paint, and string. By the end of the week, it was a giant spider. The kids enjoyed it and Janelle says they will enter again next year if they are able to.

All awards will be given October 8 so stop into Reynolds and vote on your decision today. 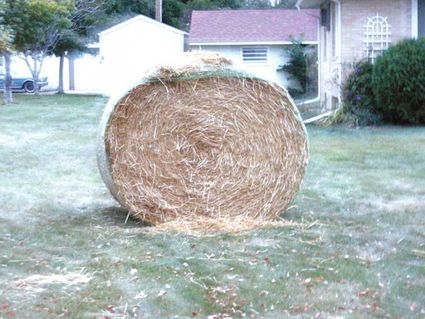 Just an ordinary round hay bale sitting on the Boys & Girls Club office lawn was the starting point for the hay bale art.