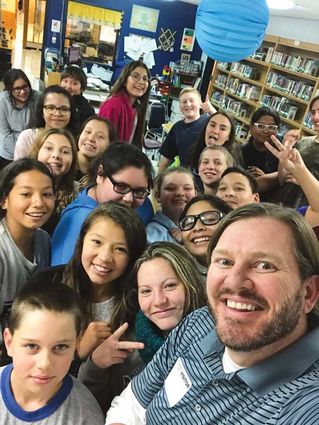 Ryan Acra, author of the Sugarbeet Falls book series, with students during one of his school visits.

Montana author Ryan Acra is amidst a book tour for his book series, Sugarbeet Falls, teaching kindness and creativity to students both across Montana and the nation.

The Sugarbeet Falls book series follows main character Xander Zackery, a seemingly ordinary sixth grade student, who discovers that he has the power to conjure up superheroes, a family trait passed to him from his grandfather. The superheroes don't have the typical superhero powers like Superman and Batman, but help Xander with everyday tasks. Xander discovers his powers one afternoon when he runs out of toilet paper. He thinks to himself that it would be handy if a superhero showed up to bring him more toilet paper, and suddenly in the shower appears a blind superhero, who hands him an extra roll.

Acra's inspiration for the book series was his son Zack, who was born in Acra's senior year of high school. "We kind of grew up together," Acra said. "He liked to come up with superheroes. One time he came up with one called the Mist. He's invisible, but he makes people wet when you get around him." Inspired by his son's non-traditional superheroes, Acra went on to pen the first Sugarbeet Falls book, "Fantastic Friends".

The series title is an homage to two of the places he grew up, Chinook and Great Falls. The Chinook school mascot is the Sugarbeeters, which Acra describes as "terrifying". Mixed with Great Falls, the series title was born.

Acra began writing the first book about three years ago. So far, he has completed two volumes of the series, with the third set to come out around Halloween this year. Acra has four more volumes outlined in his head, yet to be penned.

Acra has made an unexpected career out of writing and touring the Sugarbeet Falls series. "I actually was in a big corporate job. I worked for Loenbro, a big oil and gas company. When I started to learn about the publishing industry and how hard it is to get books published and get it out to readers, I decided to start my own publishing company," which he calls The Get It Factory. Acra publishes the Sugarbeet Falls series through his company.

Touring with the series was equally as unexpected. "When I finished writing the books I didn't even consider touring them. I didn't think anyone would read them," he explained. "Then I went and talked to my daughter's class on career day. I went to three or four more schools in Great Falls, and I had a lot of great feedback," Acra said. "I found a void, and I found a passion for talking to kids about kindness and creativity, and helping kids think creatively," he said.

During his school visits, "we create a superhero together. I draw a circle and we talk until we have a superhero with all these wild powers. Some shoot pepperoni pizza out their eyes; others burp poisonous gas."

Acra has been all over the country with his series, including a trip to the Cincinnati area, and many towns in Montana. Acra was recently in Culbertson, and will be heading to the Beverly Hills and Los Angeles, California area soon.

Acra continues to book school visits, and has started Superhero School, "an online program that allows me to give parents and kids writing prompts. There's a community to share your work and a chance to win prizes," he explained. The program begins November 1st.

Acra lives with his wife, Becky, and three daughters, Perry, Haven and Lakey, in Great Falls. His son Zack, the inspiration for Sugarbeet Falls, is a television producer in Billings.