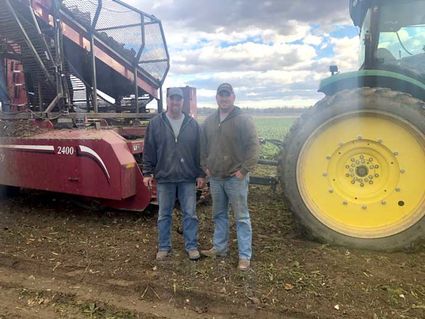 Savage's Alex McPherson is grateful for his family's success in the beet farming industry.

McPherson is a fourth generation beet farmer, delving into farming following his 2006 graduation from Savage High School. Alex began helping his father, Craig, and more recently began taking over more of the day-to-day operations. "It's figuring out what needs to go where, and who needs to do what," he said.

The family has about 550 acres of beet crop, and has an otherwise very diversified operation. "Sugar beets are our main irrigated cash crop. We just got out of malt barley, and now we have wheat, corn and irrigated alfalfa, cows, and a small dryland operation. It keeps us pretty busy," McPherson said.

During harvest, McPherson is grateful that the beet industry is so successful in the area, mentioning the Intake court battle. "We kind of got a win. We need the sugar beet industry around Sidney. It brings in a ton of revenue for the County, and lots of jobs. There's no other cash crop around that pays what the sugar beet pays," he explained.

The McPhersons complete beet harvest with help from many others. "This year I probably had ten people out in the field. A lot of them are just locals that take time off work to come help," he said. They also have two South African workers that help about nine months of the year. "One is in his sixth year here, and the other is in his third year. They know what needs to happen. They've been great."

This year's crop has been plentiful, according to McPherson. "So far our tonnage is high. It's well over 30 tons. We shoot for 30 tons every year. Our sugar has been 18.5% sugar. Last year was a little bit higher but the tons were a little bit lower," he said.

McPherson and his family enjoy their farming life. "I like working for myself, and I like being able to see something start to finish-putting the seed in the ground and seeing it harvest at the end of the year. It's pretty rewarding."

McPherson's wife, Carly, "gets to be the boss at home," and his daughter, two-year old Abby, gets to "spend quite a lot of time in the combine. The couple also has a six-month old son, Nolan. McPherson hopes they'll want to be involved in the family farm. The family makes their home in Savage.