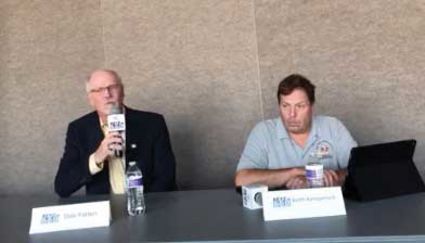 More than a hundred people gathered at the Rough Rider Center on Monday, October 22, to hear candidates for State Senate and State House of Representatives, McKenzie County Commissioner, and McKenzie County Sheriff. The Watford City event lasted two hours, as each candidate answered a series of questions designed to flesh out their thoughts and opinions about the issues.

Beginning with introductory words from Titus Stenberg, who is the sportscaster for Watford City Wolves athletics, the event was moderated by Chris Simon, the news director for KEYZ Radio. The event then turned to the state office holders, with two minutes given for introduction and then questions were asked to individual candidates with two minutes to answer, and ninety seconds given to their opponent to respond.

Keith Kempenich spoke first, who is the incumbent in House District 39, which includes McKenzie County. Kempenich spoke of the great changes to McKenize County in recent years.

Dale Patten, who is running unopposed for the State Senate District 39 seat previously belonging to now-retired Bill Bowman, explained his background in Watford City and in his work in banking and public service. He concluded by saying, "I'm looking forward to taking on the role going forward, thank you."

Simon asked the two state candidates questions regarding infrastructure funding priorities, the Legacy Fund (a fund approved by the 2009 North Dakota legislature that sets aside oil and gas revenue for long-term use of future generations), the drug epidemic, an oil revenue "trigger system" (which eliminates an oil revenue tax if the price of oil drops below a certain point), and other issues. The two State House and State Senate candidates, both of whom are Republicans, had general agreement in their brief answers.

Vawnita Best was the only candidate among the four who are vying for McKenzie County Commissioner to attend the event, while others claimed they had previous engagements. Best explained her background in McKenzie County and then her goals for what would be her second term as commissioner.

Best told the crowd, "As your commissioner, I will continue to work on building a home for our future, focusing on the following priorities; securing and prioritizing funding resources, supporting efficient and responsive service delivery, and leading researched, community-focused policy discussion and decision-making."

She continued, "I ask you to ask yourself these three questions before you cast your ballot on November 6. Who understands the issues before us? Who will think objectively, work collaboratively and vote every time with the community's best interests in mind? And who will research and problem-solve for McKenzie County, its people, and its economic drivers?

Matthew Johansen, who is running for McKenzie County sheriff, was the first of the two candidates for that office to speak. Johansen claimed that there were former peace officers who would come work for him because of his reputation among law enforcement.

Johansen said, "I have an 18 year career in public service as a sworn peace officer, with 11 of those years here in McKenzie County, with 9 months serving as interim sheriff from November of 2016 through August of 2017. I have experienced peace officers that want to come work for me because of the reputation I have in law enforcement of being honest, temperate and trustworthy."

Gary Schwartzenberger, the incumbent sheriff of McKenzie County, spoke next. He began by discussing his birth and background in Watford City and then moved on to his work in the McKenzie County Sheriff's Department.

Schwartzenberger explained, "I've spent the last three and a half years, almost four years, to rebuild this sheriff's office in the height of this boom, rebuild structure, and bring it to the 21st Century where it belongs. I feel like I have a lot of gas left in the tank and leadership I've learned in the military to help carry this agency to the next level in the next four years."

A question was asked to Matthew Johansen regarding the biggest criminal threats to the county.

Johansen answered, "I think the biggest problem out there is drugs and property crimes. Drugs are a gateway to crime and it's one of the major problems we see on a day-to-day basis. And one thing we can do to combat this problem is the Northwest Narcotics Taskforce. We have two positions for that task force and for the last ten months those positions have been vacant. I would work to get those positions filled."

Schwartzenberger answered, "My team has had over a dozen town halls throughout McKenzie County and one of the biggest issue is drugs, of course. We went from six to eight cases in 2016, giving money to the Northwest Narcotics Taskforce, so I made a change there. I assigned one deputy – I want to make a clarification from the last forum we had – I did assign one person to that and I recommended another one and then Matt [Johansen] implemented that person into the taskforce. It was a combined effort. And we went from six to eight cases in 2016 to well over 300 cases because of that change by implementing deputies into the task force instead of just paying the taskforce."

Johansen and Schwartzenberger were also asked questions about the importance of a rapid response or "SWAT" team. Schwartzenberger indicated that there was a SWAT team in Dickinson and Williams County and bomb squad services in Minot. However, there could be foreseeable plans, Schwartzenberger claimed, to start something similar in Watford City.

"We started building an SRT program - special response team program – when I first got into office and we had some grant money we used to buy equipment for the deputies, but it got put on the backburner with all the uptick in activities. That I think is one of the most appropriate things we can have is an SRT team right now and in the next four years I would like to develop that so that we can work together with those other SWAT teams in the communities. I don't think we're ready for a complete SWAT team, but an SRT is the first step to that and I'm very open to SWAT in the future as we grow."

Johansen answered the same question, "Personally, I don't think we have the manpower currently for our own SWAT team, so I think using collaboration with Williams County or Dickinson would be our best bet right now."

He continued, "We do have a sniper team. Usually a sniper team is associated with a SWAT team, which we do not have. I do think collaborating with other communities to have a SWAT team would be great."