ONEOK Expands Infrastructure In The Bakken 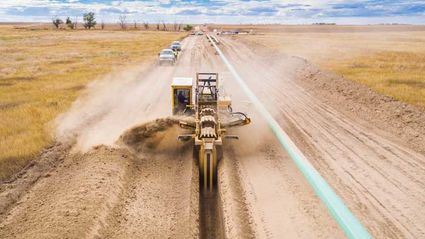 ONEOK is actively increasing its infrastructure in the Bakken, as seen in this photo of work on their Elkhorn pipeline. (Photo submitted by ONEOK)

ONEOK is a leading midstream service provider and owner of one of the nation's premier natural gas liquids (NGL) systems, connecting NGL supply in the Mid- Continent, Permian and Rocky Mountain regions with key market centers and an extensive network of natural gas gathering, processing, storage and transportation assets. Oneok is the largest independent operator of natural gas gathering and processing facilities in the Williston Basin.

Headquartered in Tulsa, Oklahoma, but with an operation center in Sidney, Montana, Oneok has a large and growing operation in the Bakken oilfield. That operation is set to grow even larger with an additional project in the area that will increase pipeline capacity and natural gas processing capacity exponentially.

Expecting to spend $410 million dollars on the new project, Oneok is beginning the Demicks Lake II natural gas processing plant in McKenzie County, North Dakota. It is slated for completion in early 2020.

Demicks Lake I, the project's predecessor, is a gas processing plant that was suspended from completion during the 2015 oilfield downturn, and it was just announced in March of 2018 that the project is again being continued. That plant was deemed as especially important given its location in Fort Berthold, which has to flare more than 80 percent of the gas released from wells instead of it being captured and utilized. That location is also central for Bakken production. Demicks Lake I is supposed to be online by the end of 2019, but will soon be operating at capacity, making the Demicks Lake II addition a necessity.

Demicks Lake II will increase Oneok's capacity in the Bakken, effectively doubling their ability to process natural gas at this location. Upon completion, Oneok's natural gas regional processing capacity will increase to more than 1.4 billion cubic feet per day. The completion of both projects is already approved by the Public Service Commission.

Oneok is also expanding in other regions with new projects, including the Arbuckle II pipeline in Texas and Oklahoma, which will increase their natural gas capacity by 100 thousand barrels per day.