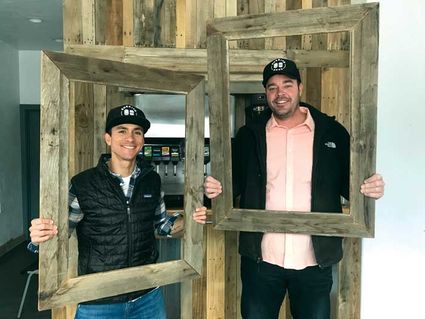 According to owners Ryan Seigfried and Nick Ybarra, their new Watford City restaurant offers "food to fuel your adventures." The new restaurant offers an array of burritos, bowls, salads and nachos made from fresh ingredients.

Located at 113 South Main Street in Watford City, Burrito Bros. replaced the Siggy's sandwich shop, and is the third of Seigfried's Watford City area restaurants. Seigfried and Ybarra's partnership was born out of a love for extreme experiences. Ybarra is the founder of the Save the Maah Daah Hey non-profit, which encourages the use and preservation of North Dakota's Maah Daah Hey Trail through extreme races. According to Ybarra, Seigfried specializes in "extreme catering", having catered several Maah Daah Hey races over the years. "At one of the races, I watched him cater food for over 300 people, at the finish line from sun up to sun down all by himself," Ybarra said of his now business partner. When Ybarra asked Seigfreid why he would put himself through such a challenging day without any help he simply responded, "Just like you like extreme mountain biking, I like extreme catering."

Seigfried and Ybarra developed Burrito Bros. based on the idea that food is fuel. "We wanted the kind of food that we wanted to eat-something used as fuel for hard working people," Ybarra explained. "I view food as not only an enjoyable necessity of life, but something that fuels me for my job and adventures," including hosting and riding 100 mile races on the Maah Daah Hey. "You can come and eat in, or take it to go. It's fast, easy and healthy."

Seigfried feels that Burrito Bros. is filling a void in Watford City. "We serve both ends of the spectrum. Our burritos are over a pound. There are a lot of people out working hard, so it makes it easy to fuel yourself with combinations of our rice, beans, meat and other additions," he explained. Ybarra added, "You can have the biggest, baddest truck in the Bakken, but if you don't put the right fuel in the tank, it isn't going anywhere, people are the same way."

Seigfried said the most popular menu item is the California burrito, made with steak, fresh, made-daily guacamole and pico de gallo, and monterrey cheese, topped with French fries. Other offerings include a 'choose your own adventure' option, with a selection of rice, beans, and fresh toppings, as well as other specialties, including a 4-pound 'Brorito,' which comes with a Burrito Bros. trucker hat. Finish the 'Brorito' in under an hour and you get your picture on the Brorito Wall of Fame.

The interior décor includes lots of locally reclaimed wood, saved from the landfill and other industrial accents. "We wanted to take the existing space and not only give the community another good food option, but also make a small part of Main Street a little more useable and enjoyable," Ybarra said.

The restaurant, which opened in late October, was well-received in the Watford City community. Their Facebook page includes customer reviews boasting "Totally mouthwatering cuisine," and "great service and a welcoming environment," as well as photos of their fresh ingredients, and a selfie of Ybarra himself, fueling his Maah Daah Hey adventure with Burrito Bros.

Though the first week they were "crushed," having actually run out of food, said Seigfried, they've adjusted a few things, and "now it's going really well."

Enjoy the fresh selection of burritos, bowls, nachos and salads at Burrito Bros. from 10:30 a.m. to 10:00 p.m. daily, at 113 South Main Street in Watford City. The restaurant even offers delivery within the "Burrito Zone". For more information or to build your own burrito, call 701-444-2002.