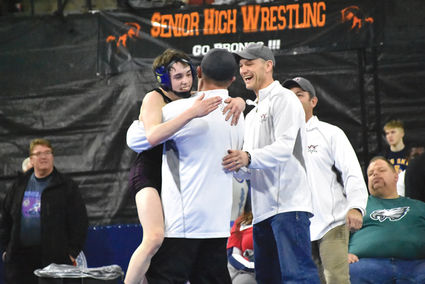 Kaiden Cline gives head coach Guy Melby a hug after winning the championship at 103 lbs. Assistant coaches Nick Lonsky and Ty Graves were also there to congratulate him. (Photo by Jody Wells)

The Sidney High School wrestling team ended their season on top of the podium at the All Class State Wrestling Tournament in Billings. The Eagles soared into first place on Friday 16 points ahead of the five-time state champion Havre Blue Ponies. By the end of the tournament that lead was extended to 62 points with a score of 250 for Sidney and 188 for Havre. It has been 11 years since the Sidney team last won a championship.

The Eagles had two state champion wrestlers this year. They just so happened to be the smallest and the biggest wrestlers on the team. Kaiden Cline beat Wyatt Mager of Fergus/Lewistown with an 8-4 decision at 103 lbs. At 285 lbs. Ryan Horner pinned Keegan Mires from Dawson County/Glendive in 5:59. Also making it to the finals but finishing second were Christian Dean at 126 lbs. and Jace Winter at 138 lbs.

Sidney had a number of wrestlers that fought back in the consolation rounds to finish third, fourth and fifth. It was their tough showing and numerous pins that racked up the points for Sidney to leave all the other teams in the dust. Placing third were Kade Graves at 120 lbs., Jett Jones at 160 lbs. and Sawyer Thogerson at 205 lbs. Jace Johnson at 145 lbs., Trevor Dean at 170 lbs. and Avery Gurney at 160 lbs. all placed fourth. Waylon VanBuren had a fifth place finish at 132 lbs.

So how does it feel to break Havre's winning streak? "Good," stated Sidney's head coach Guy Melby. "We have the utmost respect for Havre. I really like Scott (Havre's head coach) as a friend and a coach. It's a mutual respect. Class A is pretty classy. All of the coaches have respect for each other."

The 2017-2018 wrestling season was a momentous year for the team and coach Melby. At the Class A duals Melby won and surpassed the 500 dual win mark, making Melby one of the most successful coaches in dual team competition in Montana history. 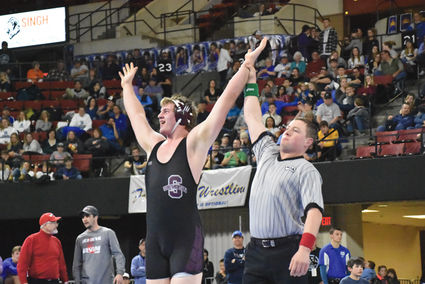 Ryan Horner looks up at the Sidney crowd when his hand is being raised after winning the state title at 285 lbs. (Photo by Jody Wells)

It has taken awhile for the Eagles to gain respect during this season, especially for those that were judging them by last season's finish. "We came out of basically nowhere. Nobody but our coaching staff knew we were going to be this good," said Melby. "We were 10th last year, so we went from 10th to first. We had four placers last year and our highest placer was fourth and now we have 11 placers, two state champs, two seconds and a bunch of thirds. It's a great stepping stone and a great confidence builder for our guys."

The team has worked hard to get to this point, beginning at the end of the 2016-2017 season. The Monday after last year's state tournament they began a strict weight lifting program. "We said on Monday we are going to start lifting and it didn't stop until this past Wednesday," stated Melby. The team also competed thoughout the off-season in both individual and dual team tournaments that amounted to about another half season of mat time.

The team has been ranked first in the Montana High School Coaches Association poll since the beginning of the 2018-2019 season. They have a wrestler ranked in every weight class. Individually ranked first are Kaiden Cline at 113 lbs., Aden Graves at 132 lbs. and Jett Jones at 182 lbs.