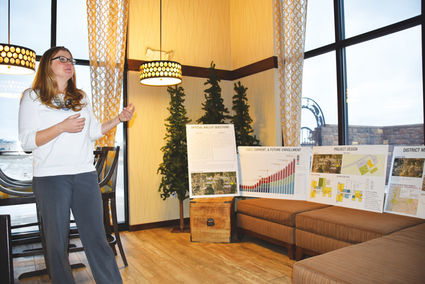 Shilo Chavez of the 'Vote Yes Committee' speaks about the proposed elementary school at the Watford City Network Luncheon on Dec. 5.

McKenzie County voters will decide whether to approve or deny two requests designed to fund upcoming anticipated needs of the school district.

Question one asks residents to approve a general obligation bond in an amount up to 35 million dollars, for the purpose of providing funds necessary to construct a new elementary school. It will raise millage an additional 13 mills, which is equal to $13 dollars on each thousand dollars of taxable valuation for the first taxable year.

Question two asks residents to approve an increase of its school Building Fund Levy from 10 mills to 20 in order to approve additional anticipated building needs.

The Roundup spoke with Shilo Chavez, who works with the 'Vote Yes Committee,' which is advocating for the passage of both questions on the ballot. Chavez has lived in Watford City for about a year and a half, and is a parent volunteer. She explained the purpose of the committee.

Chavez explained, "The 'Vote Yes Committee' is trying to get the word out about an upcoming vote we have on January 8 in McKenzie County. There's going to be two questions on the ballot. The first question addresses the school that was approved by the school board and the bond that we need to build that school. The second question addresses the future challenges the school will have. Our projections currently show that by the time the new school is built, we will likely be at capacity again. The second question deals with this, saying that in the event we reach capacity and need a third elementary school we can go ahead and increase the building fund mill levy from 10 to 20, so we can address the needs for a new school in the future."

When asked why, if the new elementary school being built is not expected to be sufficient in size, why not just build a bigger school to begin with, Chavez asserted that to do so wasn't a practical solution.

"We've had that asked," Chavez said. "One, studies have shown that kids learn better in a smaller environment. Kids do better in a smaller school. We don't want them to feel like they're lost in a crowd in a big school. But also, it doesn't make sense to do a bigger building especially for an elementary school because parents' pick-up and drop-off becomes a nightmare. Also, in regards to a cafeteria, it's difficult. Right now we have kids eating as early as 10:40 a.m. and others as late as 12:40 p.m., and with more kids in one facility it would become that much more difficult logistically."

According to Chavez, there aren't many vocally opposing the initiatives.

"I've not talked to anyone who is actively encouraging people to vote against it. We have had some negative comments on the Facebook page questioning lay out and design," Chavez reported.

Chavez also claimed that taxpayer burden would not be exorbitant should the two ballot initiatives pass.