Week 1 Report from the Legislature 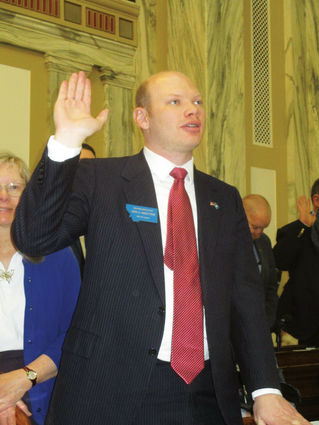 MT House Rep. Joel Krautter at the swearing in.

The first week of the legislative session in Helena got underway this past week. I was excited to be sworn-in, along with 30 other freshman House members and with family and friends present.

While the session officially began on Monday, the unofficial start for me was the day before, as a bipartisan group of a dozen legislators and I gathered at the home of Chief Deputy Attorney General Jon Bennion to make sausage and visit.

Senators Daines and Tester, along with Attorney General Fox each highlighted parallels between making sausage and making laws. The takeaway for me was how one can start with very different ingredients or in lawmaking, different ideas, that taken in combination, can still result in a good final product.

The biggest issue addressed in our first week was a discussion on the rules that will govern the session in the House of Representatives.

Concerns for why rules needed to be reformed were that current operating rules gave the Speaker of the House the opportunity to send bills he may not like to a committee of legislators he has discretion to appoint, where the bills can be killed and only resurrected to debate on the floor through the supermajority blast vote of 60 representatives.

Concerns on the other side were that by reducing the supermajority to a simple majority, it would undermine the work of committees who hear testimony and also undermine the power of the majority party.

My priority was to support rules that encouraged more fairness and transparency and discouraged the type of dysfunction we see coming out of Washington, D.C. I also pushed for a compromise that would bring lawmakers together to begin the session.

I am pleased to report a resolution was reached on the rules reform that passed the House on a bipartisan 88-12 vote, and earned the support of all Republicans.

The new House rules will now more closely mirror the rules that have been in place in the Senate for more than 100 years. 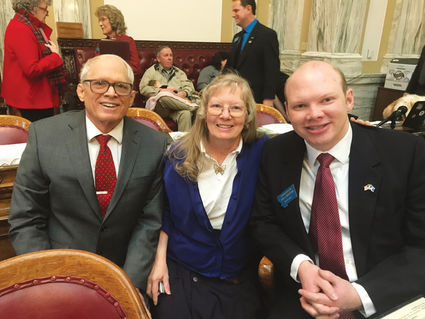 Krautter's parents Dr. Martin and Lual Krautter were able to attend the swearing-in.

The composition of committees will no longer be at the sole discretion of the Speaker, individual members will have more influence on which committee a bill is assigned to, and numerous other safeguards have been instituted to ensure more fairness and transparency.

The blast motion has been revised to match the number of legislators in the majority caucus. This means the number of votes necessary to successfully remove a bill from committee will be 58 for this session, down from 60.

This session I will be serving on the Business and Labor, Fish, Wildlife and Parks, and Transportation committees.

Thank you for the opportunity to serve our district and I look forward to giving my next update in a few weeks. Should an issue come up that you want to reach out to me on, please contact me by phone at 406-560-5952, email at [email protected], or mail to: Joel Krautter, MT House of Representatives, PO Box 200400, Helena, MT 59620.