Community Comes Together to Help Those Inpacted by Tornado 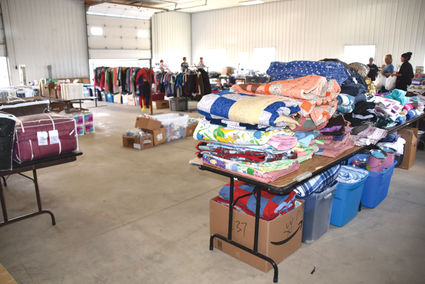 Pictured are some of the items donated to the individuals and families impacted by the tornado that struck Watford City on July 10.

The storm that rocked Watford City on July 10 ended with the fatality of a young child, critically injured nine people and hurt more than a dozen others. It also left parts of Watford City in shambles, particularly the Prairie View RV Park that suffered the bulk of the damage. More than 200 homes were destroyed and many families were displaced by the EF2 tornado, many of them RVs or trailers lived in by out-of-town oilfield workers. Recovery efforts have been underway since then, and the community has risen to the challenge of caring for those affected.

The Roundup spoke with Karolin Jappe, the McKenzie County Emergency Planner, about the end of the financial recovery process and how the efforts to help the unfortunate turned out. According to Jappe, all those who were adversely affected by the tornado and who requested assistance have now received the financial assistance offered them. She also spoke well of the generosity of those who helped in the time of need.

Jappe told The Roundup, "Everybody got what they needed. In the end we got from all over the state and also Montana, close to 270 thousand dollars. We didn't really raise it, in terms of effort, it was just freely given."

When asked her specific role in the disbursement of funds, Jappe explained, "All I did was get the money from the bank and have them write one check to the North Dakota Community Foundation because I want everything as transparent as can be."

For Jappe, it was important that others be involved in the process of fund disbursement, to which they're better suited and so she can focus on other tasks.

She continued, "After about a month, I got to each of the banks and asked them to write a check to the foundation, which in turn has Lutheran Social Services write a grant as a part of the protocol and they're the ones that did the checks and got them to the people."

Many people in the community have remarked how impressed they are with the generosity of all those who supported the tornado victims.

Jappe concluded, "It's pretty well over, we think we got everybody taken care of and the community was very generous."