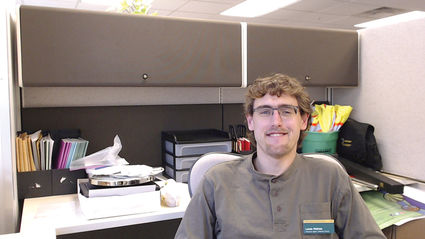 Holmes is originally from Sioux Falls, South Dakota. "I've been a city slicker all my life and had no farming experience growing up," explained Holmes. Although he grew up in a non-agricultural community, he developed a passion and interest for agriculture-related sciences. "I've always been interested in biological sciences and when in college, I decided to pursue a degree either in animal science or plant science. Working a summer job for Monsanto as part of their field crew introduced me to the concept of plant breeding/research and agronomy in general. This topic interested me and therefore solidified my decision to pursue plant science, namely agriculture science," said Holmes.

"For a while, I was very interested in plant breeding and had my heart set on that profession. However, after learning about the agriculture extension program and extension-based research, such as what I ended up studying for my Master's degree, I found extension work provided exposure to a wider variety of topics and a broader spectrum of knowledge/experience," stated Holmes.

When asked what drew him to the area, he said, "The main thing that drew me to Williston was the job offer for my current position. I was simply willing to go wherever the job took me. After the job interview, I drove around Williston a little bit to see what it was like. The main thing that drew me in then was not only how much this town has already grown, but also the potential that existed for this town to continue to grow."

So far Holmes has enjoyed his job as an extension agent. He explained that he thinks his career in extension has been successful. Holmes is currently involved with the 66th Annual Hard Spring Wheat Show and a community tree planting day in celebration/recognition of Arbor Day.

Holmes hopes to bring a positive attitude toward agriculture sustainability as well as towards environmental conservation. He also hopes to inspire young people in the area to not only learn about agriculture but to make an effort towards helping agricultural producers improve their livelihood.

Holmes said, "I hope to bring a desire to get out and see the world. I served as a Peace Corps Volunteer in Zambia, Africa for two years. As a result, I have a deeper appreciation for the things I have here in America. I also have a better understanding of how to help people in developing countries such as Zambia and I hope to pass on that understanding to both current and future generations."