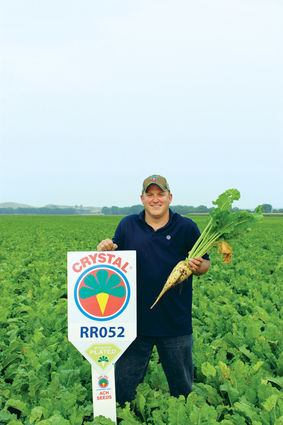 Jeff Bieber proudly displays one of his sugarbeets that got its start as seed from ACH.

Jeff Bieber grew up on the family farm north of Fairview and returned to farm full time after graduating from Minot State University in 1993. Jeff met his wife Jessica while at Minot and they were married in 1991. He farmed with his Dad Jim as JB Farms until the late 90s when he went on his own. Now, he's excited that his son Justin decided to come back after graduating from UND. "We're working on getting him started and getting his own acres," Bieber said. Daughter Jenna is in her second year at NDSU.

The farm consists of 450 beet acres plus durum and spring wheat. Bieber has also planted soybeans and corn the last couple of years, a result of becoming a Pioneer Seed sales rep. "Pioneer Seeds has a tremendous line of different crop seed," Bieber explained. He sees great potential for soybeans as a rotation crop for beets since soybeans condition the soil and need less fertilizer, making them less expensive to grow. There are some disease issues however so rotation with beets has to be at least three years.

Bieber feels privileged to have worked with great landlords now and in the past. Those include his parents, aunt and uncle Harlow and Annabelle Bieber, Charles and Julie Flynn and Rex and Shirley Niles. "Whatever I've needed, they've stepped up and gotten it done. They've all been great to work with," he said.

While growing beets has its challenges, Bieber appreciates the reliable, stable cash crop that has been grown here for 100 years. "Compared to other crops, we're lucky to have that stability," he commented. He also said that the only way to deal with challenges in the industry is to take more ownership in the crop produced.

Challenges that Bieber sees include the financing aspects of getting started, both for himself and now Justin. Weather is always a challenge with the ideal being a nice spring to get the crop in early, a summer with no damaging weather events, and four to six weeks of good harvest weather in the fall. "In the fall, we know we may have to deal with cold and moisture but the industry is pretty well set up to handle it," he said. He also said that water is critical to any beet operation and losing that water or the ability to control it would be ugly.

Rhizoctonia and Fusarium are Bieber's biggest disease challenges, with some cercospora, but he purchases seed with that resistance and sprays as necessary. He plants only ACH seed varieties with strong genetic resistance and seed treatments. On the horizon, he sees potential issues with weed resistance to chemicals with the Roundup ready beets. Other areas are experiencing much larger resistance issues so their experimentation with solutions will benefit this area when needed. "It won't be such a steep learning curve when it does happen here," he said.

Bieber says timing in the spring is crucial to his operation. He plants spring wheat and durum first, then plans to have beets planted by May 1 and the other crops as the ground is ready. Although early is still better, he finds that often the late planted beets do just as well since the ground is warmer.

With 200 acres of sugarbeets now under pivots, converting from flood irrigation is gradually taking place on the Bieber farm. He has noticed a bump in production in the pivot ground, and is learning that less is best, that the fields need to dry out in between irrigating, to help prevent some of the diseases that flourish in wetter soil. He has also taken advantage of the Water Users Management education classes offered by the soil conservation district in Watford City, learning how best to apply water, including probing the soil to help determine needs.

Bieber loves farming and has also had the opportunity to connect with growers throughout the region as a sales rep for ACH seeds for over 15 years, and throughout the country as a board member of the American Sugarbeet Growers Association for 12 years. Initially he partnered with Gordy Rambur, selling to the north growers while Rambur handled the south. For the past eight to ten years since Rambur retired, Bieber has sold to the entire Sidney Sugars growing area. "As an unexpected benefit, I've gotten to meet and know the guys really well and develop great friendships," he said.

In their spare time, Jeff and Justin enjoy car racing with Jessica as their biggest fan. "It's a great way to spend time together," Jeff said.

Being able to farm with his family and have fantastic landlords are the best parts of Bieber's farming experience. Jessica is a teacher at Eastside School in Fairview and helps with everything she can, particularly in the summer. Jenna has done everything from irrigating to running the combine, and Justin is back on the farm full time, continuing the farming tradition.