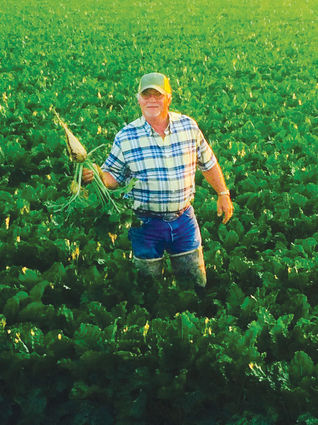 Scott Buxbaum with one of his sugarbeets.

Scott and Anita Reidle Buxbaum both grew up on farms north of Fairview and have continued the farming tradition their whole lives, welcoming children and grand children along the way. Their son Brian, his wife Trish and their four children live on, and farm grandma and grandpa Frances and Eddie Buxbaum's place, farming 950 acres with 450 in sugarbeets. Daughter Kayla, her husband Blaine Watts and their two children live just ½ mile down the road and farm with Scott and Anita. The men, women and kids all help each other out as needed.

Buxbaums farm 1160 acres with 550 in sugarbeets and the remainder in spring wheat. The land is all flood irrigated at this time but pivots are planned for the future, with the cost share programs making them more affordable.

One of the biggest challenges Buxbaums see is finding good labor. However, they have found willing young men each year since 2002 through the Communicating for Agriculture Exchange program. Most of those workers have come from Brazil and the Ukraine and are here only from mid March until early December on a J1 visa. The majority are in their early to mid 20s and are supposed to have some sort of farming experience as well as some English although that varies from person to person. The program tries to match their experience with the type of operation they are being sent to so Buxbaums get those with crop experience whereas a livestock operation would have someone with that type of background. "The lady who does the J1 program is a great gal to work with," Anita said. "She understands our needs and those of the workers." She was a J1 trainee herself when she first came to the U.S., went back to Sweden and then immigrated and went to work for the program. The trainees are usually able to buddy up with other workers in the area from their home country so that helps them socialize and deal with homesickness. The trainees gain valuable experience here and then go home either to their family farm or are able to find employment with that experience on their resume. Some have even gone to work for companies like Syngenta in their home country.

"It's really neat to watch the kids. They show up not really knowing anything and they just grow up before your eyes. In six months, they're driving trucks and tractors and welding," Scott said. Scott and Anita will employ two trainees this year while Brian will have one, with the three sharing housing.

Buxbaums had a really good beet crop in 2018 averaging 34 tons and 17.99 sugar. "Mother nature blessed us last summer," Scott said. Springtail has become more of a challenge but they are working on solutions for that. They didn't have much trouble with cercospora last year and Scott credits the cooperation between the EARC, Sidney Sugars and agronomists for changing the compounds from one year to the next, allowing for control without developing resistance by the disease.

Scott recently took on a new role as president of the Montana Dakota Beet Growers Association, replacing Kjeld Jonsson who is now the president of the Big Sky Co-op Board. "I'm excited for the future," Scott said. "It looks like the possible purchase of the factory is going to be a really good move for the area."

Buxbaums love to farm with Scott stating, "The best thing about farming is when you harvest a crop, knowing that every decision you made and all the hard work you did, from planting to harvest, is the reason the crop is there."