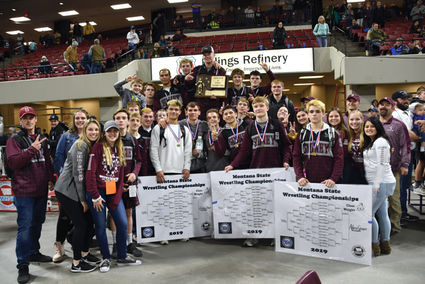 The Eagles pose with the state championship plaque at the Metra in Billings on Feb. 9.

At the end of the first day of tournament competition the Sidney team led the pack with 140.5 over Havre at 86.5 and Polson with 73.5. Sidney then proceeded to bury the competition on the second day of wrestling. In the semifinal round Kaden Cline at 113#, Aden Graves at 132#, Christian Dean at 138#, Zander Burnison at 145#, Riley Waters at 160# and Jett Jones at 182# all advanced to the championship.

The following consolation semifinal round was the first time in team history that all individuals won their matches to move on to the consolation finals. Of the 17 state qualifying Sidney wrestlers, 14 finished in 4th place or higher.

The eight winners in consolation finals were Everett Jensen at 126# and Trevor Dean at 170# finishing 3rd. Jordan Darby at 120#, Kolton Reid at 132#, Kade Graves at 138#, Dylan Lutz at 145#, Jace Winter at 152# and Brodey Skogen at HWT all placed 4th. "This has never happened to me before," commented coach Guy Melby. "To have all eight guys win. Other coaches were coming up to me to say it had never happened for them either." 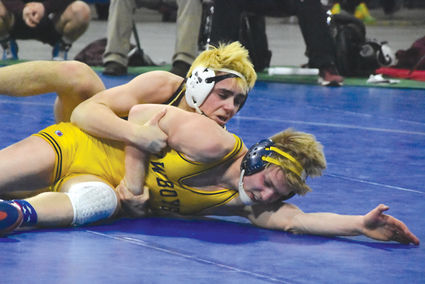 At the beginning of the championship round Sidney clearly had the state team title wrapped up. Each individual wrestler could compete without the added pressure of needing to earn team points. Because of the random draw start, Riley Waters was the first Sidney wrestler to compete at 160#. Waters defeated Cooper Hoffman of Beaverhead Co. 12-6. Jett Jones was the next Sidney wrestler at 182#. Jones pinned Colton McPhee of Columbia Falls in 5:52. Frenchtown's Walker Dyer at 113# defeated Kaden Cline 0-11. At 132# freshman Aden Graves defeated Damian Leidholt of Miles City 2-0. Christian Dean beat Havre's Lane Paulson 4-1 at 138#. The last Sidney wrestler to compete in the Championship round was Zander Burnison, losing by fall in 0:38 to Martin Wilkie of Havre.