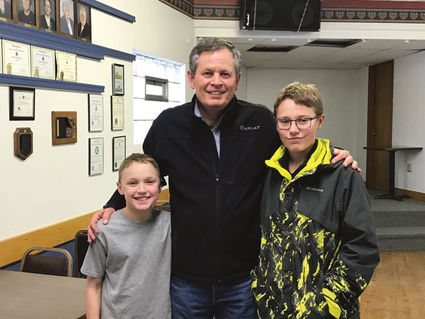 Senator Steve Daines visited Sidney on Saturday to attend the Richland County Republican Party's Lincoln-Reagan Day Banquet and made time prior to that event to meet supporters and veterans at the Sidney VFW Hall. Fielding questions on a number of issues, Senator Daines gave his thoughts on various political matters and took time first to discuss the importance of border security.

"I wish every member of congress would jump on a plane and go to the Southern border and spend a few nights with Border Patrol and that is what I did," Daines told the crowd of approximately two-dozen residents.

Recalling a recent trip to the American-Mexican border to survey the problems along the demarcation, Daines explained, "I got picked up by Border Patrol at 2 a.m. there in Texas in the Rio Grande Valley Sector. It was 277 miles of border, and is ground zero for the majority of where illegal immigrants are coming over as well as illegal drugs. And why are they coming over in that specific area in the Rio Grande Valley Sector?"

Daines continued, "I'll tell you why. It's because in other sectors like Yuma, Tucson, San Diego, they put physical barriers up, employ technology, and they see reductions of 95 to 99 percent of illegal crossings."

Daines said, "I've always said if you want to find out the truth, with all due respect to bureaucrats, go listen to people in the field and they'll tell you what's going on. I spent time with the agents and they're pleading with us to provide the resources for barriers and to get this done. They're catching hundreds of illegals every night and day in just that one sector alone."

While with the Border Patrol, Daines said that he saw the apprehension of illegal aliens first hand.

"We watched them apprehend two men from Honduras at about 4 o'clock in the morning. It was misty, radios were cackling, and we saw these men run across a field and they caught them," Daines recalled.

Daines also recalled having seen cartel scouts watching the border and reaching cartel 'mules' via radio and warning them of Border Patrol activity. Daines said, "They're not being inconspicuous. They're radioing upstream to help people bring drugs across."

These drugs are making it into Montana, according to Daines. "The number one drug hitting Montana is meth," the Senator reported. "This meth is over 90 percent pure. The meth of twenty years ago in Montana was home lab meth. This meth is cartel meth, price has come down, and distribution is expanding. Because of these Mexican cartels, we have a meth epidemic right here in Montana. I've spent time at the Rimrock Rehabilitation Center in Billings, and the number one addictive substance for moms is meth, even for mothers of small children. What's happening on the border affects us here."