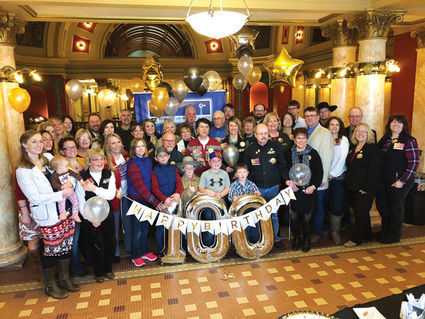 In his comments to the crowd gathered at breakfast, Bullock read a Proclamation recognizing MFBFs 100th birthday and declaring February 13, 2019 as Farm Bureau Day at the Capitol. Both the House and Senate read proclamations recognizing MFBF's 100-year celebration and the organization's contributions to farmers, ranchers and Montana agriculture.

"Who would have ever known Farm Bureau would become 100 years old, but in many respects Farm Bureau is 100 years young, meaning that incredible work has been done but it's never time to rest on one's laurels and say 'We've done enough.' It's to build on the credibility and work for the next century," said Bullock. "Whether you are rallying support for producers affected by disasters like drought or fire, or educating folks in Helena and Washington, D.C. on ag policy, Montana Farm Bureau really has been a strong voice for its members and Montana agriculture in general."

The birthday celebration was part of MFBF's two-day Calling on the Capitol. Other agenda items included visits with Attorney General Tim Fox, Department of Livestock Executive Officer Mike Honeycutt, Office of Public Instruction's Elsie Arntzen, and Deputy Director Laura Smith, Department of Health and Human Services. In addition, attendees had the opportunity to sit in on legislative Floor Sessions, testify at committee hearings and visit with their legislators during dinner.

This was the first time Julie Bramlet, a Mountain West Farm Bureau Insurance agent had been to the Capitol. "One of the reasons I decided to attend Calling on the Capitol was to bring my 14-year-old son," the Dillon resident said. "We wanted to learn more about how the entire process worked and to find out more about the issues. I've realized that it's more fun to watch the Legislature in person than to simply read about it. I was very impressed with Montana Farm Bureau's three lobbyists and how much they know about the different bills. It's interesting to get details from them and hear about the implications you might not realize."

Debbie Bricker who attended COTC with her husband, Earl, said, "I found it interesting to hear about the bills that have been introduced and Farm Bureau's position on them, such as House Bill 237 called the 'Real Meat' bill. We need to tell our story and make sure people are aware of what is meat and what's being artificially produced. It was interesting to learn about Senate Bill 206 regarding country of origin placarding for grocery stores. This sort of information this bill says grocery stores need to provide begins at a different level; retailers can't be expected to know where a cut of meat originated."

Bricker said hearing the governor's Farm Bureau's birthday proclamation was wonderful, as she and Earl have been long-time Farm Bureau members. "We're proud to belong to Farm Bureau because they do such a good job keeping members informed on issues relevant to agriculture. Their lobbying ability in Helena and Washington, D.C. is the primary reason we've been members for so long. In addition, it's a great organization for networking and learning from other farmers and ranchers. Montana Farm Bureau has been a driving force advocating for agriculture for 100 years and we know they will continue to do so for the next century."