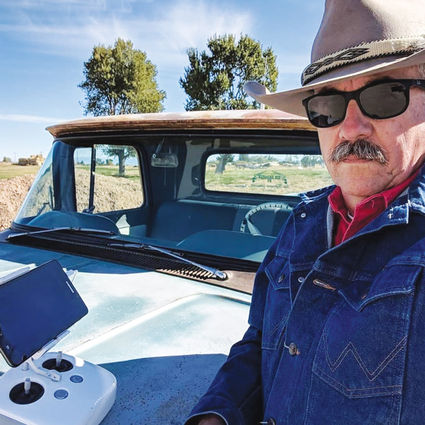 The MonDak Ag Days and Trade Show will be held on March 7 and 8 in Sidney at the Richland County Event Center. Hosted by the Richland County Chamber of Commerce and Agriculture, the event will host speakers on a range of topics and will include country comedian and pundit, Chad Prather. The event will also highlight RanchHacks, an Information and Technology Systems organization that seeks to equip farm and ranch operations.

Operated by Smittie Smith and based in Montana, RanchHacks is focused on serving the ranching and livestock industry by training ranchers and livestock producers to leverage technology. They help with computer and network systems, business automation, websites and social media, unmanned aerial systems, thermography, and radio communication.

The Roundup spoke with Smith about RanchHacks and the plans for his upcoming presentation at MonDak Ag Days and why ranchers should stay up on the latest technology."

Smith told The Roundup, "In the late 90s we had GPS and we started playing around with precision farming and by 2003 we were farming by the square foot. If you were a row-cropper you couldn't keep up with a precision farmer. But, that didn't benefit the cattle grower at all. That technological advance didn't help them. That changed with online auctions for bulls and some of that, but there's still problems in terms of ranchers being able to leverage technology to help them."

"As the younger ranchers come in," Smith explained, "they're more interested in not using paper, but using technology that's available to keep their information. Where I step in, is helping them accelerate that process. I've worked with ranchers for about 5 years and understand best practices with regard to information technology. I can help those ranchers skip the mistakes and get right to what works."

"At MonDak Ag Days we're going to talk about some basics like buying computers, how to determine what technology to invest in, we're going to cover cloud-based systems and why those cloud systems can offer real benefit to the ranchers and to livestock operations."

Smith continued, "We're going to talk about drones and why they'll probably change ranching significantly in regards to pasture and range management, and finding cattle using thermology and infrared technology."

"I think the real benefit is going to be multispectral imagery," said Smith.

"I know guys who have bought drones and used regular visual-range drones and it can work, but it's so much better to use thermal. It makes all the difference in the world. With that, the cow is a bright red and its body heat makes them stand out. I can see cattle with that half a mile to two-thirds of a mile out."

Smith has a background in Silicon Valley and was in the software industry for 25 years. Beginning as an Information Technology expert in Japan, he then worked at Microsoft, Apple, and various tech start-ups. Smith launched RanchHacks after moving to Montana.

Smith, who has been married for thirty years to a wife with whom he has two children and a grandchild, said, "Starting RanchHacks has been a dream for probably four or five years. I joined Montana Stock Growers about four years ago and began to talk with them about how to translate my background in technology to work alongside them."

He continued, "I've had an interest in livestock and ranching for most of my life. As a teenager I rode horses and had opportunities to work cattle in the summers. I had the interest from early on but just couldn't figure out how to do it. Some folks from the Montana Stock Growers Association encouraged me to come, one thing led to another, and RanchHacks was born."