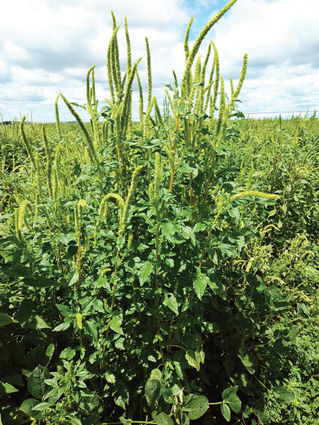 Palmer amaranth can grow to be 6 to 8 feet tall. (NDSU photo)

Palmer Amaranth, a relatively new and very aggressive type of pigweed, has become increasingly problematic for North Dakota farmers. In the early summer of 2018, it was discovered in McIntosh County in south-central North Dakota and now has been found in five different counties within North Dakota.

This weed originated in the desert region of the United States, then spread to the Mississippi Delta before invading Missouri, Iowa, Kansas, Wisconsin, Minnesota and South Dakota, as well as other states. It can grow up to two to three inches per day and reach a total height of eight feet. One single plant of Palmer Amaranth can produce up to one million seeds, and it emerges throughout the growing season. Heavy infestations of these weeds can significantly reduce yields of crops. So far it has been reported to reduce yield up to 91% in corn and 79% in soybeans. Palmer amaranth is also extremely difficult to control because it is prone to being resistant to many herbicides.

Palmer Amaranth seeds can spread with almost anything such as farming equipment, wildlife, water, and wind. In other states, seeds have been found in native seed mixes used for pollinator or wildlife habitats and in potting soil and hay. It is important that the public is aware of this weed because of the threats it poses to the production of agriculture. For more information on this weed, plan to attend Dr. Keene's presentation.