By MT Fish and Wildlife and Parks 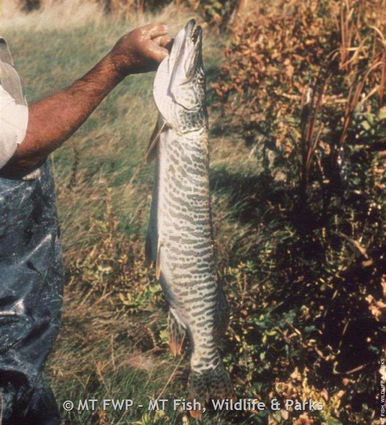 A couple of tiger muskies were reported caught recently in Fish, Wildlife & Parks Region 7, one at Gartside Dam near Sidney and one at Tongue River Reservoir. These are the only waters in the region that have tiger muskies, so it's a rare and exciting opportunity.

It's also a chance to remind anglers that they need to abide by the statewide regulation for tiger muskie, which is one fish daily and in possession, and the fish must be over 40 inches in length. Fish not meeting these dimensions must be released.

It's also worth mentioning that tiger muskie cannot be speared.

The tiger muskie, or tiger muskellunge, is the sterile, hybrid offspring of the true muskellunge and the northern pike. It is a fast-growing, carnivorous fish with a reputation for being difficult to catch. They are bred in hatcheries for stocking purposes.