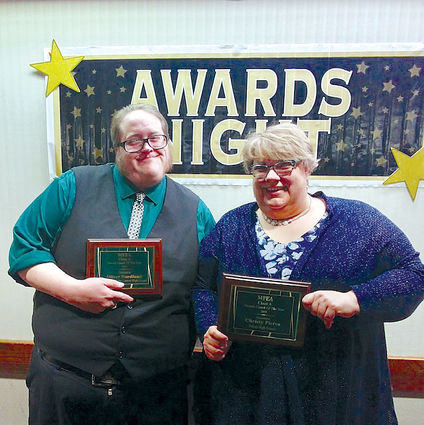 Christy was awarded this honor at the yearly coaches meeting in Bozeman, March 2 and 3.

Christy's interest in drama started in college when she took drama courses in Lansing, Michigan. She worked mostly backstage as a stage manager or director. When she moved back to Sidney she became the Drama Coach and has been coaching for the last eight seasons (October 1-January 31). She not only directs the high school play but has also has taken on directing the middle school play as of this year.

Along with Christy, Gail Staffanson, Speech Coach and Hunter Gordon, Debate Coach all work together to make things go smoothly.

She works during the day at XTO Energy, her "pay the bills" job and then moves on to her true passion of Drama Coach from 3:30-6 p.m. in the evenings and on weekends. After all that she returns home to her baby Charlie, a black lab. Christy says Charlie is a good boy and sometimes accompanies her to the middle school.