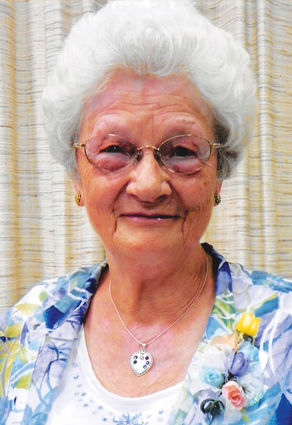 Funeral services for Annie M. Franck, 86 of Glendive, MT formerly of Sidney, MT were held at 2 p.m., Friday, March 15 at Pella Lutheran Church in Sidney with Pastor Audrey Rydbom officiating. Interment was at Sidney Cemetery, Sidney, MT under the care of Fulkerson-Stevenson Funeral Home of Sidney. Visitation was on Thursday, March 14 from 10 a.m. to 6 p.m. and Friday, March 15 from 10 a.m. till noon at the funeral home and one hour before service at the church. Remembrances, condolences and pictures may be shared with the family at http://www.fulkersons.com.

Ann was born on July 27, 1932 to Gust and Alma (Geintz) Gatzke in DeSart, ND. Ann attended school in New England, ND. Ann was united in marriage on October 30, 1951, to Joseph Franck at St. John's Lutheran Church in Dickinson, ND. They made their home in South Heart, ND and Savage, MT in early years. They moved to Sidney in 1965.

Ann was a member of Pella Lutheran Church, Sidney Senior Citizens and Glendive Senior Citizens. The highlight of Ann's life was caring for her family. She loved family gatherings and attending all the grandchildren's events. She enjoyed the many card games of pinochle, whist, and "nickels" played by all. Ann spent many hours in her yard and garden and keeping an "eye" on the neighborhood.

She was preceded in death by her parents; her husband Joe, three brothers, one sister, three step children and one son-in-law.