Richland County Cooperator of the Year 2018-19 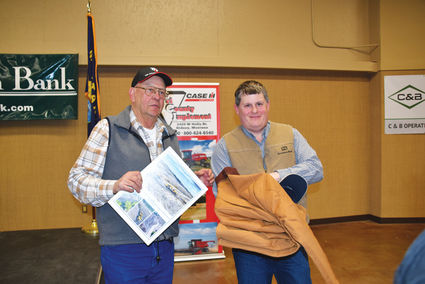 Wade Whiteman, right, presents Don Franz, left, with the Cooperator of the Year Award during the MonDak Ag Days Banquet held on March 8 at the Richland County Event Center.

Each year the conservation district presents an award to an individual or entity that enhances conservation. We rotate the award between range conservation and irrigation. Irrigation is highlight for 2018. When thinking back about irrigation over the last couple of years, one thing stood out. Although the entity we are presenting this award to didn't cooperator with the conservation district, they did show the community that through cooperation, work can get done, canals can be reconnected, and crops can get watered in a short period of time.

The canal breach on August 21, 2016 sent 100,000 cubic yards of dirt and 7000 cubic feet per second of water into the lower farmsteads and fields. Once the Lower Yellowstone Irrigation Project officials surveyed the situation and had an estimate of the cost to repair the damage they contacted Franz Construction to do the repairs. Franz Construction worked with Nortana Grain to get the best fuel price in order to keep costs down. Over 200,000 yards of dirt were moved to form the new canal, two crews kept the equipment going 24 hours a day to get the water flowing as quickly as possible to the acres of crops impacted by the breach. Twelve days later the canal was reconnected. This feat was accomplished thanks to the hard work and determination of a company that realized the importance of co-operating to achieve a goal. Due to this co-operation crops weren't lost, producers didn't suffer financial losses and the community benefited.

The Richland County Conservation District would like to honor this co-operating spirit by presenting the 2018/19 Co-operator of the Year to Franz Construction Inc.