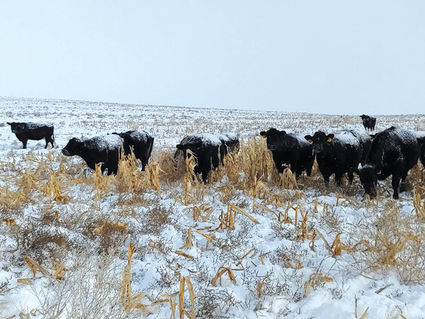 Cattle graze on corn this past winter (photo submitted by Tim Fine).

Tim Fine, Sidney MSU Extension Agent, conducted a winter corn grazing study. The purpose of the project was to see if a corn crop could sustain cattle over winter. The project was set up to see if dryland farmers/ranchers in Eastern Montana could graze standing corn as an alternative to feeding hay all winter.

The study was conducted in Richey, Montana on Marlin Johnston's farm/ranch. They seeded a cover crop of turnips, radishes, clover, safflower, oats, and sudangrass in one field. In another area they seeded sudangrass, and then in two other fields, they seeded four different varieties of corn.

In mid-November, they turned 110 cows onto the cover crop field and rotated them through seven different paddocks using electric fencing to divide the paddocks. After they were finished with the cover crop, they transitioned the cattle to sudangrass which consisted of three paddocks, and then in late December they moved them onto the standing corn crop."They are still grazing on what is left of the 30 plus paddocks that were constructed," said Fine.

"Each paddock in the cover crop, sudangrass and corn was set up to allow for seven to ten days of grazing. Early in the season, we were moving the cows every ten days but when the snow began to fall, and temperatures dropped we were moving them closer to seven to eight days and at various points gave them access to two paddocks at a time," explained Fine.

There was also some low-quality hay, straw, and supplement that was fed to the cattle. Fine noted that the cows did not eat much of the supplement when they were on the corn.

Throughout the project, Fine said he found the animals' behavior to be most interesting. "The way the cows and wildlife have reacted to the electric fence has been interesting to see. Our fields and fences were set up in a wildlife corridor, so the deer and antelope did not respect the fences as much as the cows have. With that being said, once the temperatures dropped and snow started to accumulate, the cows did not respect the fences as much," said Fine. 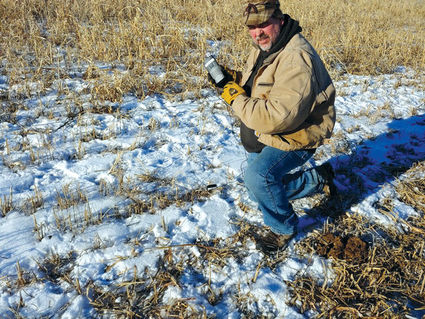 Dave Haverkamp from the NRCS office checks the voltage on the electric fence containing the cattle (photo submitted by Tim Fine).

Fine was happy with the results and considered the study successful. "We can show that this study truly has worked. The objective was to see if this corn crop could sustain the cows over winter and it has shown to do so with little to no adverse effects on the cows. The cows are in good body condition and seem to be doing well. These cows are pregnant and will be calving soon so hopefully, they will produce a good calf crop and the manure distribution throughout the fields should help return valuable nutrients back to the soil," said Fine.

The goal of the study is to show that it is economically viable to graze cattle on corn throughout the winter months as opposed to feeding hay. Fine said, "We're still putting some numbers together, and we haven't finished grazing as of yet, but it appears as though this goal will be accomplished."

Fine hopes that this study will be helpful to ranchers. He explained, "In times when hay reserves are low and/or hay prices are high, I think this project clearly shows that grazing corn is a viable option. It does take some planning in determining how much and where to seed corn, there is some added labor in setting up the paddocks, and moving fences in the dead of winter can sometimes be a challenge, but it is definitely more price efficient than cutting and baling hay and using machinery every day to feed cows."