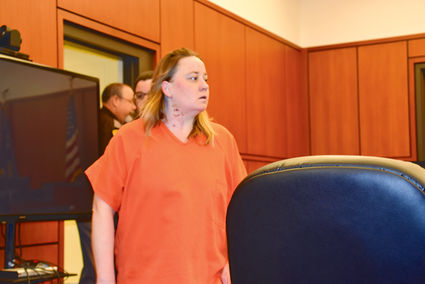 Sidney, MT – Sasha Marie Hinds, 30, made her initial appearance in court in Sidney at 10 a.m., March 29. Hinds appeared before Sidney City Court Judge Luke Savage who advised Hinds of the charges against her. Hinds requested a public defender, but declined to have a probable cause hearing. Judge Savage bound the case over to District Court. Hinds' next court appearance will be in the 7th Judicial District Court in Sidney on April 15, 2019. Bail remained set at $1,000,000. Hinds is being held at the Richland County Detention Facility.

Hinds was arrested and charged with Deliberate Homicide and Aggravated Assault in connection with the death of her 2-month old daughter, Kylie Ann Hinds, and the stabbing of Brendan James Sheehan. Hinds was arrested by the Billings Police Department based on a Sidney City Court warrant after being released from a Billings hospital. Bond was set at $1,000,000. Hinds was held in the Yellowstone County Detention Facility pending extradition back to Sidney.

On March 16, 2019, at 8:28 a.m. officers with the Sidney Police Department and the Richland County Sheriff's Office were dispatched to an apartment in Sidney for a welfare check on a baby in the custody of Hinds who was described as having "mental problems". Officers gained entry into the apartment and discovered Hinds and the unresponsive infant in the bathroom. The infant was immediately transported to Sidney Health Center. Hospital staff attempted to resuscitate the child, but were unable to do so.

Additional officers responded to the scene and discovered a second victim, Brendan Sheehan, 20, in another apartment building with a single stab wound to the abdomen. Sheehan was transported by ambulance to Sidney Health Center for treatment. Sheehan, who resided with Hinds and the infant, told investigators that he and Hinds had consumed methamphetamine the previous night. Hinds began behaving violently toward him and the baby that morning. Investigators also interviewed a second child who was present in the apartment that morning who described seeing Hinds' strange and violent behavior toward the infant and Sheehan. The second child described feeling afraid of Hinds and ran to a neighbor to call for help.

Hinds was also taken to Sidney Health Center for treatment due to her continued erratic behavior, and was later transferred to a Billings hospital where she was hospitalized for several days.

A post-mortem examination of the infant was conducted, and the preliminary cause of death was determined to be due to multiple deep, penetrating, wounds to the chest.

First, we wish to extend our deepest condolences to Kylie's family. The magnitude of this tragedy is hard to comprehend, and has significantly impacted the Sidney community. We would also like to express our appreciation to Sidney Health Center, Richland County Ambulance Service, St. Vincent Healthcare, Billings Police Department, Yellowstone County Sheriff's Office, and the Richland County Sheriff's Office for their assistance in this investigation.