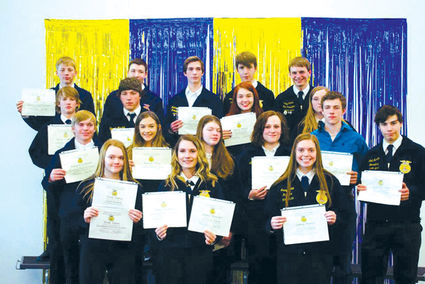 The Watford City FFA Chapter held their 60th annual banquet on April 4. Chapter officers presented the opening ceremonies. Many parents, members and guests were in attendance. Lucas Rath, our State Sentinel brought greetings from the State FFA Officer Team and Calli Thorne inspired members with her keynote speech. The Cooperative Work Experience students presented their supervisors with a certificate of appreciation. Members were presented with proficiency awards for their Supervised Agriculture Experience (SAE) projects and leadership awards. The Watford City FFA Chapter continues to develop its' members through premier leadership, personal growth and career success.

The STAR Discovery Awards went to Savanna Olson & Clay Ceynar. Both of these young members have helped whenever needed, volunteering to serve at the Bakken Expo, Cowgirls & Conservation, the Tornado Relief Fundraiser and at football concessions. They definitely demonstrate at a young age what it means to live to serve. They've also been active as Savanna showed sheep for FFA at the State Fair last summer and Clay competed in livestock judging this spring. Both of these young members have a great future in store for them and our chapter looks forward to what's to come in future years.

The 2019 STAR Greenhand was Jenna Mandler. Her accomplishments this past year include competing in the Employment Skills Contest at District Leadership this fall, attending the Winter Leadership Conference in January, and competing in Livestock Judging this winter. Jenna has helped out at several FFA events and has a great start to her SAE project.

The Blue and Gold Award went to Gabriella Kaufman. Her FFA pride has been on display ever since she was a freshmen. She has served as a chapter officer for each of the past two years and has been to State Convention, leadership conference, and district leadership about every year. She also was a teacher's assistant last year for the Ag department. If asked to volunteer & wear her FFA official dress, she always wears the blue & gold with pride.

This year's Star in Agriscience is Jacob Grieger. His passion for agriculture, responsibility and work ethic has been recognized within our agriculture department consistently over the past 4 years. Jacob has an excellent SAE that includes both grain and beef production. He plans to go on to college and get an agriculture degree.

This year's Star In Ag Placement is Jake Leppell. His SAE involves working at Moberg Ranch. Jake has taken every agriculture class possible and has demonstrated a strong work ethic. He has stepped in FFA over the past few years, serving as Sentinel the past two years and earning gold in Parliamentary Procedure at District Leadership. He also attended National FFA Convention.

This year's Star in Agribusiness is Gracie Dahl. Gracie has been a leader of our chapter in serving as a chapter officer for the past three years, the past two in which she was the FFA President and has earned gold in Parliamentary Procedure at District Leadership. Gracie has competed in Agronomy, Floriculture, was the chapter Creed winner, attended FFA leadership conferences, National FFA Convention, and has been a very active member all through her high school career. It's going to be hard to imagine FFA next year without Gracie leading. She has also been one of our top fruit sellers each year in high school and works at Cornerstone bank for CWE.

This year's Star Farmer & recipient of the Casey Johnson scholarship is Cauy Hartel. His SAEs involve working for the City of Watford City, on his family's ranch, and as a teaching assistant for our department. He has been very involved in FFA all through high school. He has volunteered to help whenever needed and competed in numerous CDEs. He was our Vice President this year and has been a chapter officer for the past three years. He earned gold in state Ag Sales & Courtesy Corp, which he was selected to represent our state at National FFA Convention. Cauy has attended leadership conferences, district leadership and National FFA Convention throughout high school.

The FFA Chapter would like to thank the community for once again showing such support to our FFA program this year and special appreciation is also given to the 1st Lutheran women of Keene for once again serving an excellent meal, the Eagles Club for sponsoring the banquet, and the Rough Rider Center for hosting it. Members are looking forward to their State Convention June 3-6.

The highlight of the 2019-year for the Watford City FFA Chapter came Thursday, April 4th, where our chapter held its 60th annual Awards Banquet. Every year, the chapter honors local people who support the FFA by presenting Honorary FFA degrees. This year's recipients were Jim Green, Bailey Hawbaker & Justin Smith.

Jim Green is the Activities Director for Watford City High School.  Mr. Green taught math for 5 years prior to coming to Watford City, one in Willmar, MN and four in Wahpeton.  His blue & gold shines through, as he was President of his FFA Chapter in high school and even attended the Washington Leadership Conference. Our members have recognized his support in FFA this year in helping coordinate concessions, donkey basketball, serving on our officer screening committee, and every other activity throughout the year.  Mr. Green has had a huge, positive impact on our program this year.

Bailey Hawbaker has been the advisor of our chapter this past year.  Miss Hawbaker's energy & enthusiasm for FFA can be seen by anyone who meets her or steps foot in her class. She started last summer and jumped right in by helping at our county fair, organizing an officer retreat, and helping to plan our tornado relief fundraiser.  She has given countless hours to our program this year and it is greatly appreciated. Miss Hawbaker has brought positivity & energy to our program this year and we are all very appreciative for all she has done. 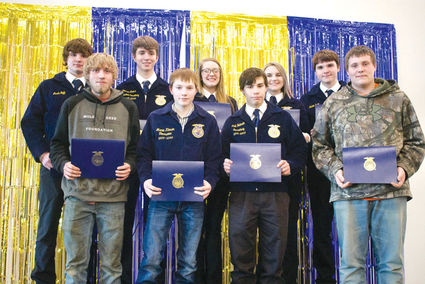 Justin Smith is the superintendent of public works for the city and has been a strong supporter of our program.  Since moving to Watford City, Justin has supported our program as both his daughter, Asha and son Bridger were involved in FFA.  He has also provided a positive Cooperative Work Experience for multiple members at the city, including Cauy this year. He has served on our Advisory Committee and his advice has been very valuable to our program.

"Honorary membership" - farmers, school superintendents, principals, members of boards of education, chapter advisors, teachers, business people, and others who are helping to advance Agricultural Education and the F F A, and who have rendered outstanding service, may be elected to honorary membership by a majority vote of the members present at any regular meetings or convention.