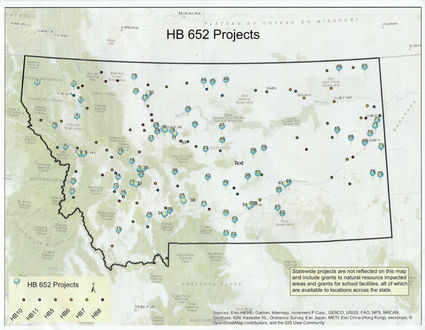 The past week saw the legislature send several pieces of major legislation, representing this session's major policy debates, to the Governor's desk for approval.

The legislature gave final approval to Representative Buttrey's Medicaid Reform and Integrity Act (HB 658) after the House approved Senate amendments that: added income verification, removed the worker's compensation premium tax, and added a 2025 sunset date to the program. A fixed sunset date is extremely important for managing a program of this size as it mandates another opportunity for the legislature to re-evaluate the program for additional efficiencies. In combination with work-requirements, asset tests, residency, 501(d) modifications, and citizenship requirements, I believe these reforms have made the current Medicaid law better. Reauthorization of the Medicaid program will also help ensure continued viability for our rural hospitals. I appreciate the support provided by Sidney Health Center and from all of the constituents who contacted me to express their approval for HB 658.

The Senate gave final approval to the state-wide 80 million dollar infrastructure bonding bill. I supported this bill when it originated in the House and I was pleased to see it move out of the Senate. Journalists in Helena report the last time Montana passed a bonding bill was 2005, as it has failed in numerous recent legislative sessions, making the passage of HB 652 all the more important. The American Society of Civil Engineers has given Montana's infrastructure a C-rating and Darryl James, the executive director of the Montana Infrastructure Coalition estimates Montana has a $2 billion backlog in infrastructure projects. Funding is available in this bill for infrastructure projects in House District 35 and surrounding eastern Montana communities. You can find a more complete discussion of these area projects in my April 10, 2019, Roundup update.

This week I voted against a tax increase to fund the construction of a new museum in Helena. This bill would raise the lodging accommodation tax from 3 percent to 4 percent to help raise $48 million dollars for a new Montana Heritage Center in Helena and also create a grant program for local museums across the state. This was a tough vote for me because I love Montana history and our local museums. But ultimately, after hearing from constituents on both sides of this issue, I voted "No" because I didn't feel we should raise taxes to pay for this. While tourists will contribute to the lodging tax, Montanans also travel our state and so it would also be a tax on our citizens. It did pass a preliminary vote in the House 56-44 and I expect it to pass a final vote before the session adjourns. 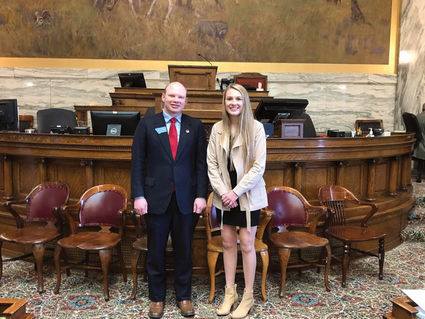 Representative Joel Krautter with Sidney High School senior Lilli Seitz who served as a Page in the Montana House of Representatives. (Submitted photo)

The legislature has several remaining issues to address. Senate amendments to the state budget still must be approved by the House before it can be transmitted to the Governor and the impending closure of Colstrip units 3 and 4 has still not been effectively addressed in either chamber. A Colstrip closure, without mitigating legislation, will have a plethora of secondary effects on both Montana rate payers and our state's future energy generation capacity. Coal has been the lifeblood of rural infrastructure projects in Montana and secure access to transmission capacity is integral to the development of any future energy sources within our state. It is incumbent on this legislature to adequately address these issues.

A highlight last week was having Sidney High School senior Lilli Seitz serve as a Page in the Montana House of Representatives. She did an outstanding job!

As always, I thank you for allowing me to serve Richland County and eastern Montana.