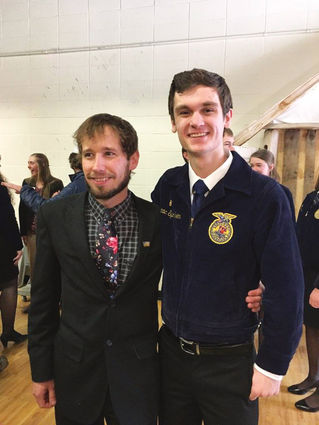 Isaac Sponheim, a freshman at Montana State University and former Richey FFA member, was elected the 2019-2020 2nd Vice President of the Montana State FFA Organization on Saturday, April 6th at the Montana FFA State Convention. "It was so surreal. After I didn't get elected last year, I wasn't sure how rerunning was going to go. When my name was called, there was a split second where I was just thinking "Wait... Did they really just say my name?" Then it was just a blur of running up to the stage and sharing the feelings of excitement, shock, and disbelief with all the other elected officers."

Sponheim is originally from Richey, MT and has been an FFA member for six years. He said, "My advisor/ag teacher, Kyle Senner, inspired me to join the Richey FFA Chapter. When I first joined FFA, I was just brought along to a contest, but Mr. Senner's encouragement and teaching made me quickly realize just how important FFA was and the impact it would soon have on me."

Sponheim explained that he had spent many hours with the Richey FFA Chapter. He has participated in community service projects such as filling sack lunches for the Lodgepole firefighters, storm debris cleanup, and building new bookshelves for the Richey Library. He has also participated in many Career Development Events (CDE) including Agricultural Mechanics, Farm Business Management, Agricultural Sales, Food Science, Parliamentary Procedure, and Extemporaneous Speaking. Competitions were never my strongest area. That being said, I do believe that accomplishments reach far beyond trophies and plaques. I would say that the journey I've been on, growing from a shy and passionless eighth grader into a confident advocate and State Officer has been my greatest accomplishment. The growth and drive to consistently be better is the most valuable reward FFA has given me," said Sponheim.

"Through holding chapter offices, competing, and attending various camps and workshops, I had come to thoroughly enjoy leadership in any capacity. I honestly saw running for a State Office as a way to pursue my passion for leadership and give back to FFA," added Sponheim.

Sponheim spent many hours preparing himself for his election as a Montana State FFA Officer. He explained, "There is a written test and several rounds of interviews once you get to the Montana FFA State Convention, so for me preparation was brushing up on my FFA knowledge for the test, utilizing past State Officers, and participating in the Torgerson's GOLD Conference to improve my interviewing skills. Something I consider just as important as prepping, however, is getting to know fellow candidates. Building strong relationships with everyone who is running for a State Officer position is a massive part of the process."

Sponheim hopes to gain many relationships from this opportunity. "I am a people person, and my friends and family mean the world to me. I really hope to build solid friendships with as many members as I can as well as my fellow State Officers, and other alumni. Having strong relationships and connections is always an advantage, and I believe it's a crucial part of living a truly full life."

Sponheim hopes to use his platform as an FFA State Officer to be an example for members who may not be directly involved in agricultural production. "My father is a pastor, and my mother is a preschool teacher, so although I have always lived in close proximity to agriculture, I have never been a part of the production side of things. I hope to show others that you don't need to have an agricultural background to have a passion for the industry."

Sponheim did not let graduating high school stop his involvement within FFA. He plans to pursue a degree in Agricultural Education. When asked if FFA has influenced his career plan, he responded, "Absolutely! FFA and my advisor have been the largest influences in my decision to study Agriculture Education. The passion for not just FFA, but the agriculture industry, and advocacy that was instilled in me as a member has directed my life in a direction I never could have imagined. I feel so lucky that I had the opportunity to be a part of a chapter with such a great advisor that helped me find something I am truly passionate about."