Simply Scrumptious And Hilburn's BBQ Have Teamed Up 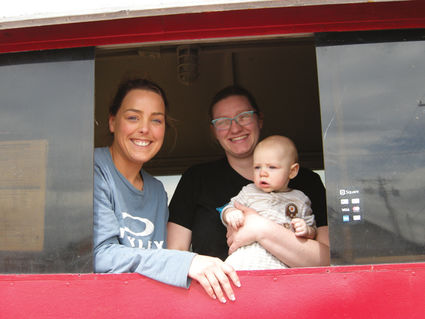 Kayla Hilburn and Michaela Lofthus met each other in a group on Facebook and are now helping each other out.

Simply Scrumptious has been a popular business in Sidney, Montana for a couple of years already. February of 2016 Michaela Lofthus bought Solid Rock Coffee Shop from Cindy Brown and started her own coffee shop and bakery. In August 2017, eighteen months later, she moved her burgeoning business into its current location, the old KFC building on Main. Simply Scrumptious has done very well since. They serve coffee, homemade donuts, pastries, and by special order; cakes. Michaela met an enterprising young woman named Kayla Hilburn on the Facebook group, Family With More Freedom and they have stayed in contact ever since.

Kayla had a business of her own. In the summer of 2017, she and her husband started a BBQ business in Fort Peck and now they were looking to expand into Sidney. Michaela had room to rent behind the bakery as well and it seemed like a good fit. April 1, the trailer was pulled in and Main street Sidney was blessed with the savory smells of BBQ. Hilburn's BBQ just sold their food from the trailer at first but now the food is served inside Simply Scrumptious. In the truck, they cook their pulled pork, brisket, and ribs. The mac n cheese, coleslaw, breakfast burritos, and other BBQ related concoctions are assembled and everything is served in Simply Scrumptious. On April 30 they started offering lunch grab bags inside the bakery. This consists of a pulled pork sammie, chips and a brownie for $8. Hilburn's BBQ is also planning on having a special Saturday event on May 4. A vote was held on Facebook on the menu for the event and the Low Country Boil was chosen. According to a video Kayla posted on the BBQ place Facebook page, the Low Country Boil consists of a pound of dungeness crab, half a pound of spotted prawns, two pieces of andouille sausage, and corn on the cob, then three to four red potatoes that have all been boiled together with some Cajun seasoning are served with a choice of two dinner rolls or a loaf of bread and peach cobbler for dessert. The event will go on from 6 a.m. to 8 p.m. Tickets are $49 in advance or $55 the day of the event.

Simply Scrumptious and Hilburn's BBQ remain two different business run by two different people but their comradery has blessed them with more than just customers. Hilburn's BBQ gets a place for their trailer, access to the kitchen and a little help with side dishes at Simply Scrumptious. Both businesses mention the other in advertising. Both Hilburn's BBQ and Simply Scrumptious qualify for the Montana Made Program and the Taste my Place Program. According to the Montana Made website, http://www.madeinmontanausa.com, the Montana Made program assists Montana businesses in developing and marketing their products both in and out of the state. The program, which also includes Grown in Montana and Native American Made in Montana, helps build recognition for products that are "authentically Montana." That means they are grown, created, made, and/or enhanced in the state resulting in 50% or more in value-added. The program requires that individuals and businesses meet the program's value-added definition to utilize the trademarked image on their qualifying products. The Taste our Place Program is relatively new. It is open to Montana-based food and drink establishments serving menu items containing Montana-grown or made ingredients. The food and drinks must be considered ready to consume by the purchaser.