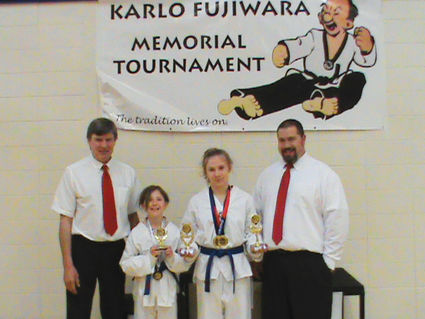 Two members of the Sidney Tendo Tae Kwon Do School traveled to Billings to participate in the 53rd Annual Montana Invitational Tae Kwon Do and Judo Championships held April 27 at the MSU-Billings Alterowitz Gym.

This tournament is a continuation of an annual tournament started by the late Grand Master Karlo Fujiwara and was held in conjunction with the Montana State National Qualifying tournament.

From Sidney Adalyn Baxter, in the 9 to 10 year old, blue belt girls division placed 2nd in forms and 4th in sparring

Brielle Baxter placed 2nd in forms and 2nd in sparring.

Brielle Baxter in the state qualifier placed 1st in forms and 1st in sparring and qualified to participate at the Junior Nationals to be held in Minneapolis, MN this summer.