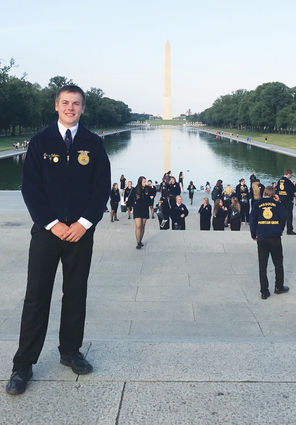 Lucas Oelkers, a senior at Culbertson High School, was elected the 2019-2020 1st Vice President of the Montana State FFA Organization on Saturday, April 6 at the Montana FFA State Convention.

Oelkers has been a member of the Culbertson FFA Chapter for the past four years. He comes from a long line of FFA alumni, starting with his grandfather, Russell Oelkers, who was a charter member of the Culbertson FFA Chapter back in 1938. "Growing up, I always knew about FFA, but there was not really any reason behind joining initially. However, throughout the last four years of being actively involved in the Culbertson FFA chapter, I have formulated a reason for being in this wonderful organization. One of the major functions of FFA is to create an outlet for all members to have a sense of belonging to an organization that is bigger than themselves. FFA has provided its members and me a support system that enables us to flourish to our fullest potentials. That promise of commitment is what has kept me interested in FFA," said Oelkers.

He explained his favorite part about FFA is partaking in opportunities that FFA provides, including community service projects, agricultural education classes, and FFA competitions such as Agricultural Sales, Agronomy, and Parliamentary Procedures. Oelkers said, "A main objective of the Culbertson FFA Chapter is having a strong presence in one's community. I have helped with and planned for many community service activities, including sponsoring a service station at the Roosevelt County Day of Service where we checked tire pressure and antifreeze levels of community members' vehicles. Another project that we do annually is hanging up Christmas light ornaments on the street light poles around Culbertson."

Oelkers added that FFA has had a significant impact on his life. "The main concept that I have benefited from is having a support system. FFA allows its members to become who they truly are as a person. Going along with the 2019 State Convention theme of "Blue and Bold," I have seen the impact that FFA has on its members, including myself, and how it empowers us to be able to become bold in our organization's blue jackets." said Oelkers.

Oelkers has always had the goal of being a Montana State FFA Officer and has been preparing for the moment he would obtain an officer position since his freshman year of high school. "My preparation for running for a state officer position started when I was a freshman. Every amount of exerted energy sets the precedence into your future. Within four months of the Montana State Convention was when I started specifically preparing for being a candidate. This entailed studying basic FFA history, current agricultural issues, distinguished individuals within the FFA Organization, and preparing for interview questions; I had to look deep within myself to answer truthfully and confidently the questions that were being presented. Furthermore, past state officers from the area, as well as business leaders within the community, provided me with the opportunity to take part in mock interviews," explained Oelkers.

Numerous encounters with people from across Montana encouraged Oelkers to run for a state officer position. "I first want to state unequivocally that without my family's support of my involvement in career and student technical organizations like FFA, I would not have been able to even consider running for a state officer position. Secondly, my advisor, Mr. Jens Nielsen, has built a solid and long-standing FFA program in Culbertson. He enables students to take risks and guides them to their fullest potential. Lastly, Mr. Jacob Martin from Culbertson was the State Treasurer on last year's officer team. He provided me valuable insight, encouragement, and advice in my preparations for running for an FFA state officer position," said Oelkers.

When Oelkers was elected 1st Vice President of the Montana FFA State Association, he was beyond excited. Oelkers added, "It was quite suspenseful being named 1st Vice President because there were only two spots left on the officer team during announcements. Subsequently, by this time my heart started filling with doubts. After I realized that I had successfully achieved one of my goals, I was overwhelmed with a sense of fulfillment. I knew that I had done it. I knew that next year my life's course would change drastically. I was eager to get to work. I wanted to put my best foot forward heading into the new FFA year encouraging leadership and community involvement."

He claims being elected Montana State FFA 1st Vice President has been his greatest accomplishment yet. He hopes to spend his year of service helping others and investing his time encouraging leadership and involvement in Montana FFA chapters and communities. "I want to give back to an organization that has given so much to me. I plan to fully immerse myself in furthering the ideals of FFA, which include putting others first," said Oelkers.

Oelkers's main goal for his time as a state officer is to highlight Montana FFA members' accomplishments, mainly through employing social media, growing membership, and spreading the understanding of FFA to high school students, FFA members' parents, and community members.

Oelkers plans to attend Montana State University and pursue a degree in Mechanical Engineering. He explained that he knew from a young age that he wanted to be an engineer. After being involved with FFA, he realized that he could continue to have an impact within the organization and his community without being directly involved in agricultural production.