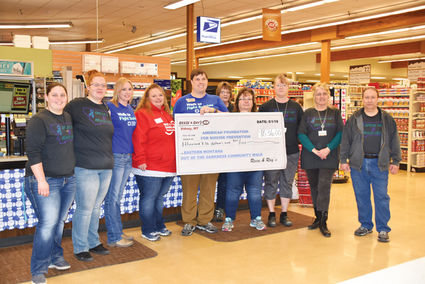 During the Month of April, Reese & Ray's IGA held their "Life Saver" fundraiser where they requested donations at their checkouts resulting in a donation of $1836 for the "Out of the Darkness" Suicide Prevention program. Store manager Kelly Burke expressed her deep appreciation to the community for their generosity. "They are the ones who made it happen," she said. "They're always there when they're needed."

Suicide prevention is important to Burke and her staff. "Suicide in this town is prevalent," Burke said. "We're hoping to make a difference and get people talking about it. It needs to be talked about."