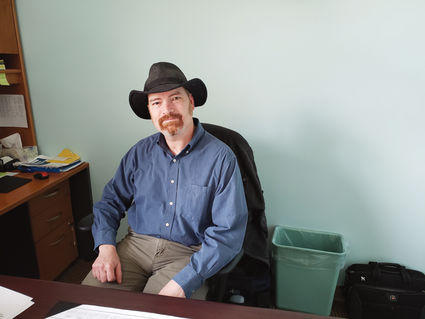 Joseph Garcia became the site supervisor for the Missouri Yellowstone Confluence Center on April 3. He brings an impressive background which includes his upbringing on a horse ranch in Southern California, four years with the U.S. Fish & Wildlife Service in northern California, working for a very large company creating large exhibits for major museums and lately developing his own company creating small exhibits for small museums.

Garcia is delighted to have the opportunity to build on the strong foundation left by the previous site supervisor, Kerry Finsaas. At the moment, he is busy attending meetings and orientation. "Right now I am concentrating on learning the job. It's a platform to build on what's there, which is already really good. I want to build on that, and keep it current," he said. The site supervisor is a different position than a traditional museum one, and as Garcia engages with the community and determines what needs are, the possibilities are endless for increased programming and engagement with visitors, schools and the area. "Most of my jobs have been in public service and have involved outdoor activities, and I will remain in that vein," he commented.

Garcia holds bachelors degrees in fine arts and geology as well as a masters degree in paleontology all from the University of Montana in Missoula. Those degrees have served him well as his first job was with the Paleontology Exploration Project, funded by the Fort Peck Paleontology Science Foundation grants, which taught teachers how to teach their students. Out in the badlands, Garcia and his crew would find a specimen, dig it half way up and then let the teachers and kids do the rest, including taking it to the lab.

While with the Fish & Wildlife Service, Garcia developed mobile kits that could be loaded into the back of a pickup and taken to students in the huge area he served. "It wasn't like here, where the kids come to you," he said. "I had to go to the kids there." The mobile kits are one of his ideas for the Confluence center, where families can pick up a kit consisting of a map, binoculars, topography plates showing rock formations, or rivers, or other landscape features, and other tools to help them understand what they are seeing. Bird watching kits with a spotting scope, written materials, and model birds are also on his list. "Families can do a self-guided tour and know what to look for with the backpack kit," Garcia explained.

A small teepee kit is also on Garcia's wish list. It would be small enough, and tough enough, for kids to put together and then furnish the inside properly with everything needed to survive the harsh landscape of the MonDak. "Everything in a teepee had its proper space to ensure survival, and the kids would learn how and why," he said.

Garcia is married to Allana and has a 17 year old son David and 14 year old daughter Becky. The family will move to the Confluence area once school is out in Glasgow.

The Missouri Yellowstone Confluence Center is located at the junction of the two mighty rivers. It is just 22 miles southwest of Williston and is open year round.