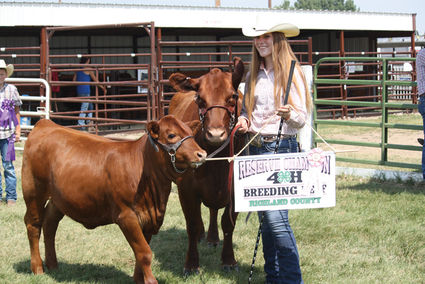 Merritt, who is in her ninth year as a 4-H member, has participated in market beef and breeding beef projects for 8 of her 9 years and poultry for six years. In 2018, the market steer, breeding beef and rooster Merritt brought to the fair were outstanding in their respective classes.

Ali is very involved with her Beef Breeding projects. She got started in Beef Breeding after selling her first steer and being so sad when he had to leave. Breeding beef filled that void for her because they always came back home. Over the years Ali has developed her very own Registered Red Angus herd. At the fair last year Merritt showed several Registered Red Angus breeding projects. She showed a nice heifer calf who took Grand champion of her class; she showed two different yearling heifers, one of which took Grand Champion of the class, and the other placed 4th in the class. Ali also showed her yearling bull. She had shown her bull as a calf and petitioned the fair board to let her bring him back to show as a yearling. Merritt also earned a Grand Champion for her family pen of 3 cows. This pen included her heifer calf, her 3 year old cow (the heifer's mother), and her yearling heifer. Merritt was very proud of these three and thought they had a real nice showing. Her Red Angus cows placed very well. The 3 year old cow took Grand Champion of her class. The cow and her heifer calf pair were awarded Grand Champion Overall Breeding. The heifer calf was selected as Reserve Overall Breeding. The pair was also selected to participate in the Grand of Grand Champions. Merritt was appreciative of her friends who helped her show her animals in the classes, in the Grand Champion Breeding drive she had five animals go through the ring and without their help it would have been impossible!

To round out her versatile showmanship, Merritt also showed poultry for six years and was awarded Grand Champion Poultry for her beautiful rooster.

Ali's mom Leigh said, "Ali did pretty well, and the 2018 Fair is going to always be a highlight for Ali and a hard one to beat."

Raising quality livestock animals, whether breeding or market is based on both genetics and feed. Merritt has purchased steers for her market projects from Kelly Bergstedt of Savage, Ron Whited and David Balducke of Sidney. Ali shared that Bergstedts, Whiteds and David Balducke have been very supportive, willing and kind to help her with her market steers and offer their experiences to help her grow in the cattle industry.

Merritt explained, "I've started my own Registered Red Angus operation. A few years ago I bought my first registered bred heifer, and since then I've been building my herd." For the size of Merritt's herd, a bull is really not feasible, so she decided to get certified in Artificial Insemination. Merritt missed three days of school and took the AI class offered in Sidney by Select Sires. She was the youngest person in the class and the instructor even talked to her about doing an internship with his company. Last year Ali was able to successfully AI her own cows. She has purchased all the necessary equipment needed and is now fully self-efficient to run her own herd operation. Everyone has been so good to her and given her the opportunity to gain so much experience in the cattle industry and as far as AI experience, she has been able to help Jason McNalley and Cory and Sara Foss do some A.I. work, which has been so great for her.

Merritt also contributes her excellence in her beef projects to Ben Johnson at R&J Ag Supply in Sidney. Ben has provided education and guidance in selecting the right feed. "Ben has been a great advisor on setting me up with the right feed," Merritt explained. Her market steers are fed a mixture of wet beet pulp, cracked corn, sweet feed, wheat bran, and rumensin. Her Beef Breeding animals are fed a mixture of cracked corn, sweet feed, and wheat bran; in addition they all receive extra minerals, cattle cubes, and hay.

In addition, Merritt has served as Richland County 4-H Junior Leader President for the past two years, and as Forever Buds Club President. Merritt also enjoys working and teaching the younger members of 4-H about showmanship and fitting to help give them more confidence and ways to better their projects. She is also currently serving as the Vice President of the Montana Red Angus Association. This past fall Merritt was asked by the National Red Angus Association to write an article on the Beef Industry Grant she applied for to assist her in paying for the AI Certification Class. She wrote an article on her AI experience and how the grant helped her achieve her goal. The article was published in the September 2018 issue of the American Red Angus Association national magazine about her acceptance of a Beef Industry Scholarship and how it has contributed to her Artificial Insemination training. 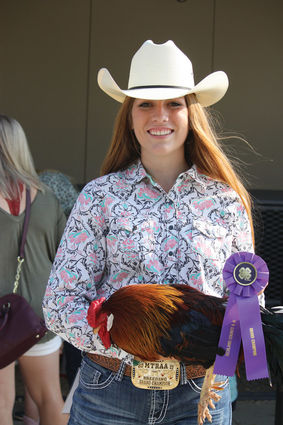 Ali with her Grand Champion rooster. She showed poultry for six years.

Merritt credits her experience in 4-H livestock projects for sparking her interest in raising and caring for animals. "It's really opened up my career path. It's what I enjoy most. My plan is to become a vet, and working with all of my livestock has helped me take the first step toward that career," she said. Merritt enjoys working at High Plains Veterinary Clinic in Sidney during the summer and fall and can't wait to start again once school is out.

Merritt will be a Junior at Sidney High School in the fall. This summer she plans to visit potential colleges. She plans to major in agriculture and animal science and pursue a degree in Veterinary Medicine. Merritt is the daughter of Roger and Leigh Merritt.