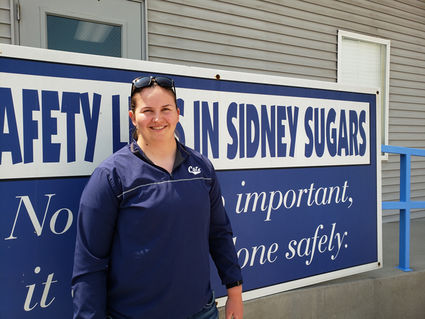 Somer Reidle, Agriculturalist: Somer Reidle began her career as Sidney Sugars newest agriculturalist on May 28. The Bainville High School graduate earned her bachelor's degree in Ag Business from MSU Bozeman this spring and applied for the position at the urging of an area grower. Reidle will oversee the Sidney and Culbertson growing areas. She said that she has lots of learning to do but wants to be able to become a good asset for the farmers and help them any way she can. She will spend the summer walking the fields, monitoring the crop and working with the growers on any issues that arise. One of her biggest jobs will be to manage the pile grounds in Sidney and Culbertson during harvest. She will also contract with growers next spring. Reidle said she grew up on a farm and ranch and is very excited for the opportunity to be an agriculturalist for Sidney Sugars. "It's a great team here," she said. "The growers and the agriculturalists are wonderful to work with." Agricultural manager Duane Peters said Sidney Sugars is very happy to have Reidle join the team and that the growers they have had a chance to meet have also been happy about the new hire.

Matthew Long, Maintenance Supervisor: Matthew Long was promoted to maintenance supervisor at Sidney Sugars effective May 28. He started work as an engineer in January of 2019 and now supervises the whole crew of electricians doing general electrical maintenance. There are also some specific projects in the works including redoing the governor on a generator and replacing the refractometer on a white pan. Originally from Polson, MT, Long graduated in December with an engineering degree from MSU Bozeman and was recruited by Sidney Sugars. He is enjoying being part of the great team at Sidney Sugars and the camaraderie that comes with it. He also welcomes the challenges that come with his job saying that there's always something new. "The job somewhat stays the same but there are also challenging puzzles to solve," he said. Long appreciates the Sidney community as well, enjoying the small town feel and getting to know people. Working at the factory and then seeing his co-workers in town gives him a sense of community that he likes. He is married with two children aged 2 and 13. 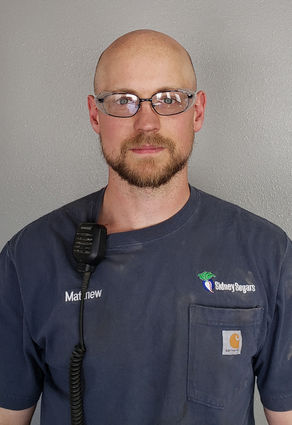 James DeHerrera, Safety and Training Manager: James DeHerrera began his new duties as safety and training manager February 15. Prior to that, he was safety foreman for 2 ½ years and a machinist for 2 ½ years before that. His goal is to make Sidney Sugars as safe as possible for its employees. As well as conducting monthly safety meetings, he helps manage the confined space rescue team, which can get workers out of tight spots. "We have a good one here," he stated. They are currently practicing high angle rope rescues for falls. Mock tank and caged ladder rescues are also practiced on a regular basis. DeHerrera would like to have the Richland County Fire Department train with them as well, since Sidney Sugars has some unique aspects and those would also apply elsewhere. As a trained EMT, he would also like to help out more in the community. Originally from Denver, CO, DeHerrera moved to Poplar in 1991. He now lives in Sidney during the week and either goes home or visits one of his children on the weekends. He has four kids, three in Montana and one in San Diego, CA. He stated, "I enjoy Sidney and Sidney Sugars and see the rest of my career being right here."