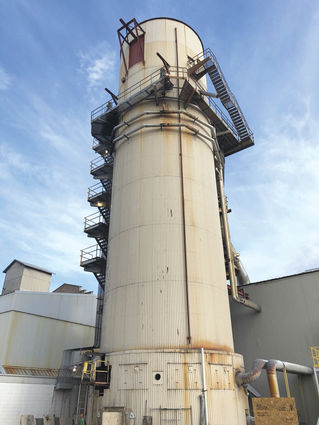 Extraction Process: One of the first steps in processing Sugar Beets is extracting the sugar from the beet cells which takes place in the Tower Diffuser. Sugar Beets are washed and then sliced into Cossettes which resemble a Ruffles potato chip. The cossettes are then scaled in the Cossette Mixer prior to being pumped into the bottom of the Tower Diffuser. Inside the Tower, extraction of the sugar molecule from the beet cells takes place as rotating flights move the densely packed cossettes from bottom to top of the tower. Fresh and Press water are introduced at the top of the tower and flow countercurrent to the cossettes, extracting the sugar. Roughly 98% of the sugar in the beet is removed from the cossettes (pulp) by the time it exits the top of the tower. The sugar juice exiting the bottom of the tower is called Raw Juice which goes on to Purification steps and eventually Crystallization.

Sidney's Tower Diffuser: Sidney's tower diffuser was installed in 1998 and has been in operation for 21 Campaigns. During each inter-campaign the large bull gear, located at the top to the tower, is inspected by the equipment manufacturer and periodically by an independent contractor. In recent years, both experts have recommended the gear be replaced due to cracks found in the gear.

New Bull Gear: In recent weeks, Sidney Sugars completed the replacement of the tower diffuser's original single-piece bull gear with a new 18-piece segmented gear. The new segments are made up of materials which prevent cracking. The easy to handle segments simplified the assembly of the gear and add the potential to replace damaged segments.

The Bull Gear replacement project also includes upgrading the electrical drive system to BMA's modernized drive system where each drive has its own VFD and is controlled by torque. This change eliminates the possibility of one of the five drives exerting more force on the gear than the others.

The Bull Gear is an essential piece of equipment to processing sugar beets and would result in significant downtime should the gear fail during campaign. The new gear should provide many years of service. Total Project cost: $1,450,000. 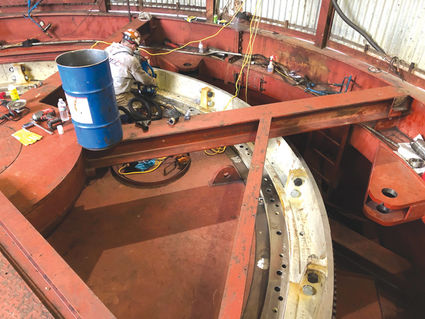 Sidney Sugars general manager David Garland provided the following updates on summer maintenance: Summer Maintenance is off to a good start with many projects to complete prior to the start of our next campaign. Planning for inter-campaign maintenance began long before we finished slicing beets and as soon as we were done processing, work began to prepare for the next campaign. Our goal is to have the plant ready by the first of September. Crop size will determine the actual start date of harvest. We have a great group of talented employees working at the factory who I would like to recognize and thank for their hard work.