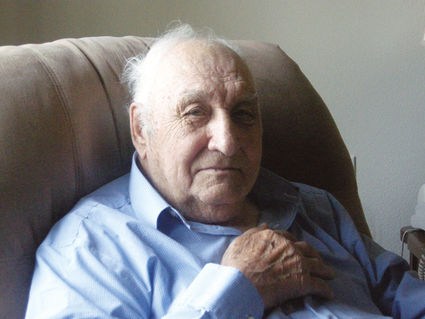 Fairview Old Timer's Reunion and Festival Honoree, Eddie Buxbaum, is thankful to be honored on this year's button. (Photo by Jaymi Loobey)

Every year since 1946, on the third weekend of July the people of Fairview, Montana have come together to reminisce and honor the people who have made a difference in the community. This year, 2019, Eddie Buxbaum will get his face on the Fairview Old Timer's Reunion and Summer Festival button.

Eddie was not born here. His family moved from Nebraska to Crane, Montana way back in 1930. He spent most of his childhood there until, in 1943, his father bought a farm north of Fairview. There, the family farmed sugar beets, wheat and alfalfa and raised cattle. In 1945, Eddie married Frances Gardner and they raised four children together. While farming and caring for his family, Eddie often reached out to participate in the community of Fairview. He was President of the Montana-Dakota Beet Growers Association, a member of the Fairview School board, the 1st United Bank (now Yellowstone Bank) board, Zion Lutheran Church council and a State Senator in Montana Jaycees. He also helped build Fairview's first pool. Eddie's wife, Frances opened her own dress shop in 1987 called The Modern Lady, which Eddie would help out in occasionally. Eddie and his family have known hardship as well. They lost their oldest child, Larry, to a tragic car crash and Frances went on to be with the Lord in 2008. One of his sons, Scott, stayed in the area but his daughter, Barbara, and son, Doug, left the area to start families of their own and bring up children and grandchildren to the Buxbaum line. According to Scott, his siblings stayed in Montana and a few of the grandchildren moved out of state. All but one or two of Eddie's descendants are planning to come back for the festival to celebrate. Eddie has spent most of his life in Fairview and called it home until 2017 when he moved to Sidney for health reasons.

Every year the festival's board members choose the honoree for the festival. Board Member Renee Sundheim said "Every year the festival committee comes up with names of community members that we feel are well deserved of the honor. Eddie has been very involved in many things throughout the years for Fairview. It was a hard choice as there are always many deserving people!!" The button will be sold before and during the Fairview Old Timer's Festival at businesses in Fairview such as Neu's Super Valu, Merchants Bank, Cherry's, Water Hole #3, Double Barrel, MonKota, Fairview City Hall, Hotel Albert, Fairview's Loaf and Jug, Auto Glass Pro, and Powder Keg. In Sidney, buttons can be purchased at Richland Federal Credit Union and Advanced Communications. They are numbered for a cash drawing and proceeds go towards the lunch served Saturday, July 20 in Sharbono Park. The festival will be Friday, July 19 through Sunday, July 21, in Fairview with lots of different contests, a parade, music, food, and games.

More information about the Fairview Old Timer's Festival can be found on flyers in the businesses selling the buttons and elsewhere around Sidney and Fairview as well as the event page for "73rd Annual Fairview Festival" on Facebook.