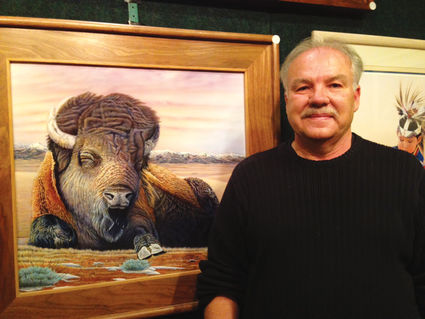 Miles Bendixon doing a show at the Annual Buffalo Convetion in Denver, CO.

Artist Miles Bendixson is a native of North Dakota, born in Williston and grew up in Watford City. The experience of growing up in western North Dakota had a profound influence on him and his way of life. Hunting, fishing and snowmobiling in the outdoors is the way he spent most of his time growing up. It was unbeknown to him at that time, what a huge roll this would play in his development as a wildlife and western artist. To him the west has permeated his soul, gradually becoming a way of life; which has resulted in the subjects he paints today.

Miles started out his career as a freelance artist, after graduating with a degree in commercial art from Bismarck State College. He did many different kinds of graphic art, from brochure & logo design, to sign painting and illustration. Illustration became an area of focus for him, having completed many portraits and caricatures as a result of that. His break into fine art came at the height of his development as an illustrator while competing in the North Dakota Fur- Bearer Art Stamp contest. After the third time competing, fortune smiled on him and he won this coveted competition in 1986. His winning entry, Beaver Pond, a painting of a beaver at streamside became the hunting trapping stamp and limited edition print, for the State of North Dakota in the fall of 1987. Winning this competition gradually moved him away from commercial art into fine art, resulting in his first limited edition print Little Dreamer. Since the release of Little Dreamer in 1989, he has published and marketed several of his prints across the US and Canada.

A major change in Miles' career came about after attending the Pacific Rim Wildlife Art Workshops in Jackson Hole Wyoming in 1995,1997 and 1998. Each year had a different featured wildlife artist that hosted and taught a group of fledgling wildlife artists from across the world.

Carl Brenders from Belgium taught in 1995, Robert Bateman from Canada in1997 and Greg Beecham from Wyoming in 1998. Being able to attend workshops taught by world-renowned wildlife artists as these had a profound influence on Miles and the way he approaches his art. He came away with the idea that art should be integrated into his everyday life and in doing so, great art can be achieved. A result of following these practices and disciplines, he believes he has been making better decisions, concerning a paintings design, attention to proportion and color choices. The workshops he attended cemented the idea that a bond should take place between the artist and the subject he paints and draws.

This has resulted in a spiritual connection to his paintings. The goal that he strives for is to strike an emotional chord within himself, as well as the audience he paints for. The Pacific Rim Wildlife Art Workshops enabled Miles to take a closer look at what makes great art that has truth, meaning, depth and purpose.

Miles latest endeavor has been the pursuit of historical western art. He recently secured the rights to do full color paintings from the Franke B. Fiske Photo Collection located at the North Dakota State Historical Society. The fascination of this photo collection for him is that it captures a moment in historical time that will never occur again. He has a deep interest in the historical western heritage of America, from the Native American, to the cowboy and horse era. The challenge of being able to piece a painting together from the old west is both motivational and inspirational to Miles, as it expands the learning process of doing art. He believes it's critical to keep learning and evolving through these processes and challenges.

Miles and his wife Jackie have resided in Highlands Ranch, Colorado for the past 21 years. His oldest son Ted lives in Park City, Utah and his youngest son Mike is married and lives with his wife Ritah and son Wyatt in Littleton, Colorado. Miles has a deep belief in God and knows he has given him the incredible gift of art. Having been given this incredible gift, he considers it a great privilege to share with others!