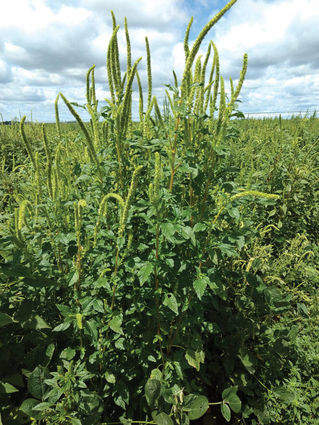 At the upcoming EARC irrigated field day I will be discussing problematic weeds and one weed in particular that may potentially be a problem for us down the road, Palmer Amaranth. In a June edition of the NDSU Crop and Pest Report (https://www.ag.ndsu.edu/cpr) this weed was addressed.

"In 2018, Palmer amaranth was found in five North Dakota counties. We believe Palmer was introduced into the state through sunflower screenings, contaminated seed, custom combines, used combines purchased from other states and railroad cars. We know Palmer also can come through other ways, such as contaminated hay, birds, water and more.

A reason for optimism that the weed can be controlled where it was found in 2018 is that there was excellent cooperation and collaboration among farmers, local agronomists, the ND Department of Agriculture and NDSU to remove plants that were found. This effort toward zero-tolerance will be needed in the future to minimize the impact of Palmer amaranth. If no additional Palmer is brought into the state, eradication will be possible.

Zero tolerance is the approach recommended by farmers and weed scientists in Midwest and Southern states who have experienced the severe economic impact of Palmer amaranth. This zero- tolerance approach also needs to be implemented by companies selling products in North Dakota, such as feed screenings, seed, hay, equipment, etc. The Minnesota Department of Agriculture inspected screenings from November 2018 to March 2019 and detected Palmer amaranth in sunflower and wheat screenings. They estimated as much as 250 Palmer amaranth seeds per pound of screenings. Some farmers from Minnesota and North Dakota that purchased screenings found Palmer amaranth in their fields in 2018. Farmers and companies need to be wary of any seed or feed source coming from states where Palmer amaranth is known to be a serious problem. Farmers are encouraged to inspect their fields throughout 2019, especially if they have purchased screenings that originated from outside the state or hauled manure from feedlots where out-of-state feed has been used. Companies should make sure they are not selling contaminated products.

Palmer amaranth can germinate in many places including cropland, pastures, gravel lots and marginal areas. Anywhere potentially contaminated feed or manure has been used should be monitored for Palmer amaranth.

Palmer amaranth was added to the North Dakota noxious weed list in January 2019. Several characteristics make it difficult to manage. The weed can grow 1-3 inches per day under optimum conditions. In 2018, many plants found in North Dakota were 6-8 feet tall. Palmer is a prolific seed producer with up to one million seeds per plant. Palmer can germinate throughout the growing season, even after postemergence herbicides have been applied or after early crops have been harvested. One of the biggest challenges is that Palmer amaranth is very prone to herbicide resistance. It is very common to find plants that are resistant to glyphosate. Some plants have been found to be resistant to five different modes of action. This resistance characteristic will severely limit options for controlling the weed. Complicating the situation is that growers will not know to which herbicides the plants are resistant.

Currently, North Dakota is in a position where we can minimize the impact of this weed because it is not widespread like it is in other states. However, to stay ahead of the weed, we need to control what has been found and be very vigilant to not bring more seeds into the state. Farmers, agronomists, and companies need to ask questions, conduct inspections and do whatever is necessary to avoid bringing in contaminated seed, feed or equipment that will spread Palmer amaranth, raise productions costs and reduce yields."

I will be discussing this problematic weed in more detail at the field day. For more information on Palmer amaranth, including how to identify it, visit the NDSU website https://www.ag.ndsu.edu/palmeramaranth.