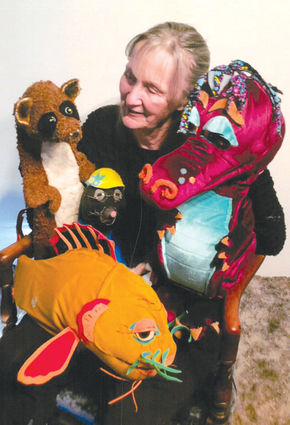 Dragons Are Too Seldom Puppet Productions Performing at the Library

The Sidney-Richland County Library invites children and their families to the puppet show, "The Dragon Who Fell to Earth," on July 12 at 10:30 a.m. The show features Dragons Are Too Seldom Puppets of Spearfish, South Dakota.

"The Dragon Who Fell to Earth" is an adventure for the whole family! The planet of Drago Minor is too crowded. Dragons have lived on this planet which is perfectly suited to their needs for centuries and centuries. But now it is too crowded. Space traveling dragons must be sent to explore other options. A few brave dragons must be sent to find a new planet. Each will take an egg so that a new colony of dragons can begin. Daisy Dragon happens to be sent to Earth. When her spaceship attempts to enter Earth's atmosphere it cracks into a million pieces. Daisy lands, head over tea cups, in a forest far away from humans. The egg lands nearby. This would not have been a problem except Daisy gets hit on the head and she loses her memory, both of her mission and of the egg. She finds a home with the animals but they do not know she is a dragon. Daisy must recover her memory. Then with the help of her new friends, she must recover the egg before it hatches. (Spoiler Alert! A witch has captured it and has evil designs on it!).

Dragons Are Too Seldom Puppet Productions with master puppeteer, Marie Scholz, has been touring the United States performing for close to fifty years. Marie's fast-paced puppet shows are full of fun and whimsey. She and her puppets travel around 30,000 miles a year, performing for schools, libraries, festivals, special happenings and any other event that needs laughter and joy.

For information about "The Dragon Who Fell to Earth", please call the library at 433-1917.