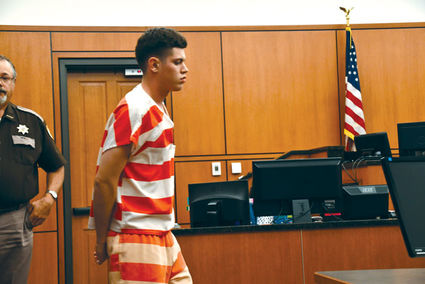 Kyle Lee Seversen enters Sidney City Court for his felony initial appearance before Judge Luke Savage on July 3. Seversen will have a preliminary examination on July 10 and his next appearance is scheduled for July 22.

On July 3 Kyle Lee Severson, 19, Sidney, was charged with deliberate homicide in the shooting death of Tyler Anthony Hayden, 20, Sidney.

According to a statement released by authorities, Sidney police responded to a report of a shooting on the night of July 2 to the Loaf-N-Jug convenience store at 706 S. Central Ave., Sidney. Upon arrival the officers located an unresponsive Tyler Anthony Hayden who appeared to be the victim of a gunshot wound. Richland County EMS assessed the victim and determined that he was deceased. Severson turned himself in to police following the incident.

According to court documents, Severson waved his right to an attorney and provided a statement to police. Severson stated to police there was an interaction between the victim and Severson's girlfriend, Karina Orozco inside Loaf-N-Jug. Orozco, Severson and his young daughter were driving away from the convenience store when the victim approached the vehicle. Orozco was driving and stopped the vehicle, then Severson shot Hayden.

Severson also stated that he had begun carrying a gun for protection after Hayden allegedly assaulted him in April 2018.

The matter remains under investigation by the Sidney Police Department with the assistance of the Richland County Sheriff's Office.

Severson's next court date has been rescheduled to Monday, July 15 at 8:30 a.m. as he has been bound over to District Court.