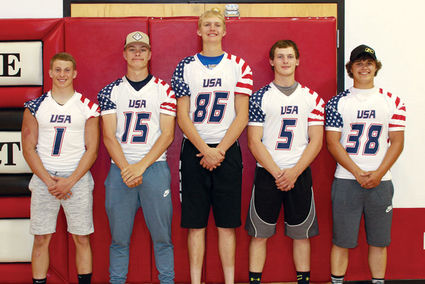 On June 30, 2019 twenty different high school football players from Montana, Wyoming, Texas and Nebraska came to Lambert, Montana to practice and enjoy the events of the 4th. Then, July 5, they continued their journey to Wakaw, a small town in Saskatchewan, Canada. The following day they challenged their Canadian counterparts in the 23rd annual Can-Am Bowl. 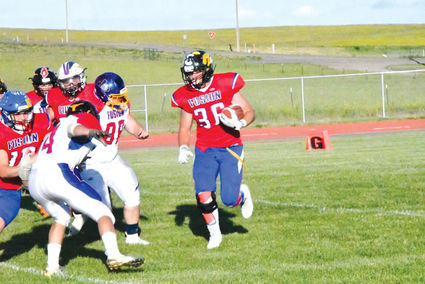 Clancy Gines Farson, WY, runs past defenders for a touchdown in the third quarter for the red team. The white team defeated red team 27 – 24.

The Can-Am Bowl was started in 1997 as an addition to the usual state and regional high school competitions for six-man football, Director Jim Miller said, "We were trying to organize a North vs. South competition when the Canadian coaches reached out to us." According to an article by Avery Le Blanc on http://www.discoverhumbolt.com, the location of the bowl changes from year to year. According to Jim Miller, so far it has always been in Canada but they are working with Canada on having the Can-Am Bowl in the United States next year. Each year the Can-Am coordinators for the American team reach out to high school athletic directors with 6-man football already in their athletics program, nationwide. The athletic directors contact coaches and the players are presented with the opportunity to play against Canada. The players are brought together to practice and enjoy the sights and comforts of the host town before playing in the bowl. In the past years the American players practiced and explored in Canada, according to Rebecca Miller, director's assistant for the American team. This year they decided to meet and spend that week in the United States because of the cost. Jim said, "It is expensive in Canada and because of the price, the American players were unable to do anything the week before the competition besides practice and sit in their rooms." This year they met and practiced in Lambert, Montana, not even seven hours from their final destination, during the town's most exciting time of the year. According to Jim, the entire town helped put the team up for the week, providing food and shelter. Not only were they the grateful recipients of Lambert's hospitality, the 3rd and 4th, the players along with Lambert natives and visitors from all over the region were treated to two street dances, a parade, fireworks, car show, and several kids activities as part of the town's Independence Day festivities. The players got to be part of the parade, had a scrimmage on the 4th, and held a tailgate party afterward for people to come and meet them. According to the Wakaw Recorder on https://wakawrecorder.ca/ the game in Wakaw was July 6th at 8 p.m. at Wakaw School. According to Rebecca Miller, "It was a hard fought battle with the lead changing between the two teams at least six different times." In the end Team USA lost 40 to 28 but they made Team Canada work for it.

The opportunity is not as widely known as the coordinators would like it to be so this year only 25 players from four different states requested to go and five of them had to drop out for various reasons. Jim had said all the players would spend time on the turf but it was tough to make a team. He would like to see the Can-Am bowl become a big deal here in the States. Jim told me he could not have pulled this off without the long list of coaches, sponsors, and volunteers that helped him get these players to Canada and he is deeply thankful to each and every one.